Introduction: Magnesium is most important and vital element of body. It needs to be supplemented adequately. It plays a vital role in insulin secretion, insulin binding and homeostasis. When Serum Magnesium is adequate, the glycemic control is better and HbA1c values will fall, thus proving that serum magnesium plays a major role in glycemic control. It is now established that diabetes can by itself induce hypomagnesemia and hypomagnesemia can in turn induce onset or worsen diabetes mellitus.

Materials and Methods: A cross-sectional study was conducted in 48 diagnosed cases of type II diabetes mellitus. This study was planned to study if any correlation exists between the level of Serum Magnesium and HbA1C in diagnosed Type II diabetics.

Results: The correlation between the two parameters was not found to be statistically significant.

Limitations: Owing to COVID-19 restrictions history regarding the duration of disease, the dietary history of the participants could not be obtained

Conclusion: Serum magnesium does not bear a constant relationship with the diabetic control according to the findings of the current study and detailed studies including multi-parametric analysis along with duration of diabetes is required.

It plays a vital role in insulin secretion, insulin binding and homeostasis.8 Low levels of magnesium have shown to damage tyrosine kinase activity and receptors involved in signaling.9 Both intracellular and extracellular magnesium deficits are associated with type 2 diabetes mellitus.10 Hypomagnesemia has been implicated in carbohydrate intolerance, hyperglycaemia, insulin resistance, complications of diabetes and hyperlipidemia.11 Hypomagnesemia is common among diabetic patients which is frequently underdiagnosed.

It is now established that diabetes can by itself induce hypomagnesemia and hypomagnesemia can in turn induce onset or worsen diabetes mellitus.11 Many studies have reported significantly lower serum magnesium levels in type 2 diabetics when compared with non-diabetic healthy controls.12 Among diabetics, low serum magnesium values were reported in patients with retinopathy.13 Magnesium deficiency may be an independent risk factor for the development of hyperglycemia.11 Systemic inflammation and insulin resistance are the important reasons for the inverse relationship of magnesium intake and diabetes mellitus.8

Good blood glucose control should be implemented early and maintained for the optimum length of time to avoid the development of complications. Appropriate control of blood pressure as well as dyslipidemia are extremely important in prevention of macrovascular complications, besides glycemic control.1 The comparative studies within diabetic population based on glycemic control are limited. With this background, we decided to study the level of serum magnesium in diagnosed Type II diabetics without microvascular and macrovascular complications and correlate with glycemic status.

The data was collected for finding out correlation between the glycemic index and serum magnesium was analysed and the results were obtained. A cross-sectional study was conducted. The sample size was 38 diagnosed cases of type II diabetes mellitus in which, as reported by previous studies 0.8647 at type I error alpha=0.001 and beta=0.0001. The estimated sample size was 48. The sampling type was purposive sample. In sampling technique consecutive patients who were satisfying inclusion and exclusion criteria were included. The Exclusion criteria were the patients with chronic renal failure, Patients on diuretics. Patients receiving Magnesium supplements or Magnesium containing antacids, Malabsorption or chronic diarrhoea, Patients with history of Epilepsy. The samples were processed for Serum Magnesium and HbA1C test by Immunoturbidimetric method on XL 640- Fully Automated Biochemistry Analyzer (Transasia Biomedical Ltd, India).

The present study revealed a near linear line of fit with a Pearson coefficient(r) = 0.092 and a significance (2 tailed) of 0.53 between serum magnesium and diabetic control as assessed by HbA1c. A value of serum magnesium between 1.7 to 2.2 mg/dl was considered normal and that for HbA1c was considered normal when less than 5.7 were considered normal. The mean Serum Magnesium level was found to be 1.86 mg/dl and mean HbA1 C level was found to be 9.70. The correlation between the two parameters Mg and HbA1C was not found to be significant and studies considering the duration of disease need to be undertaken to ascertain a definitive relationship.

Showing age distribution of the participants of the study 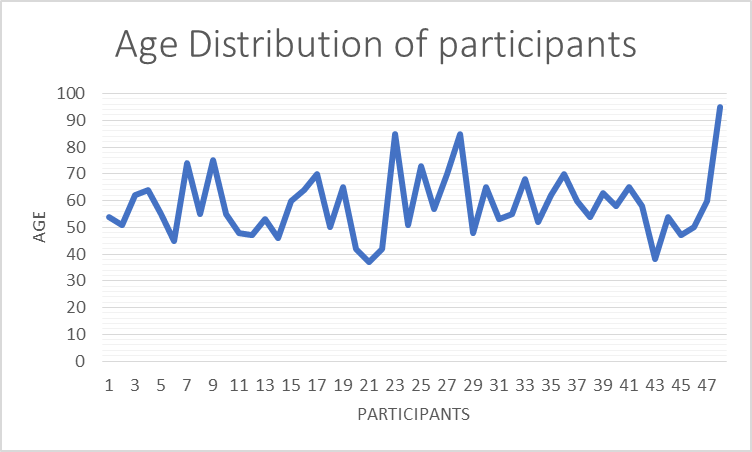 Showing age distribution of the participants of the study 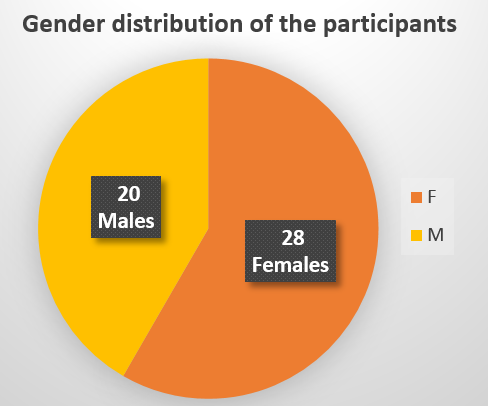 Serum magnesium is an important serum electrolyte and has a pivotal role in various functions in the body. Magnesium plays an important role in insulin secretion, insulin binding, and homeostasis. Magnesium acts directly on glucose metabolism through its role as a cofactor in the phosphorylation of glucose. Hypomagnesaemia is often left undiagnosed in diabetic subjects chronic deficiency of magnesium may contribute to systemic inflammation and insulin resistance. The negative correlation coefficient strengthens the interpretation of the HbA1c and serum magnesium values being inversely proportional. So if serum magnesium values are made to rise, glycemic control is better and HbA1c values will fall. Oral supplementation with MgCl2 solution restores serum magnesium levels, improving insulin sensitivity and metabolic control in type 2 diabetic patients with decreased serum magnesium levels. The various metabolic alterations in diabetes create a biochemically complexity in the body.14 It is also seen that corrections in micronutrient deficiency Mg, Zinc, Copper may prevent complications and help to correct the disease process. Alterations in the serum electrolyte concentrations is a major part of these pathological processes.15 A study conducted by John Thomas Palatinghal et. al, showed a negative correlation between the two said parameters.16

The correlation between the two parameters Mg and HbA1C was not found to be significant in this study.

The present study however, revealed that the serum magnesium levels did not bear a constant relationship with the diabetic control of the study population as assessed by the HbA1C levels of the participants. The current study highlights the fact that a consideration of the duration of diabetics forms a crucial component of the pathogenesis of hypomagnesemia in a chronic diabetic individual and a result consistent with contemporary literature may be yielded possibly by including the duration of diabetes of the patients. A study conducted by Noor MM, Nazir Q et al, revealed similar findings regarding the importance of the disease duration as a parameter as did the current study.17

Furthermore, detailed analysis of the various parameters including dietary intake of magnesium, loss of magnesium owing to diuresis and malabsorption need to be considered while assessing serum magnesium levels in diabetic individuals and hence, call for detailed research in the area.

The glycemic control is better and HbA1c values will fall thus proving that serum magnesium plays a major role in glycemic control. Hence, its association with HbA1c value, which indicates the level of glycemiccontrol. Propercounseling should be given to diabetic patients about the need of taking magnesium through diet and the health care professionals should be made aware of the risks associated with hypomagnesemia left undiagnosed in diabetic patients and its ill effects.

Though we could not find any association of Serum Magnesium with the diabetic control more detailed studies with bigger sample size including multi-parametric analysis are required to ascertain a definitive relationship. The duration of the disease, the dietary habits of the population under study, medications(e.g. diuretics) that participants may be taking may alter the results of the study and hence due consideration should be given to these factors in order to establish a definitive relationship.