The main aim of this work was to analyze through a systematic review the ability of Tribulusterrestris to promote the increase of hormonal levels as a mechanism for the relief of menopausal symptoms. The criteria used for the selection were: studies involving menopausal women and use of Tribulusterrestris as a treatment for sexual dysfunction and / or other menopausal symptoms. The survey of literature shows that women who used Tribulusterrestris had drastic improvement in symptoms such as vaginal lubrication, sensation in the genitals during intercourse and other constructive activities. In this study, we have found a significant increase in bioavailable testosterone after the use of the plant extracts which has great potential in the treatment of sexual intercourse and unique symptoms of menopause.

In recent times, an extensive research work1, 2, 3, 4, 5, 6, 7, 8, 9, 10 has been carried out to prove biological activities and the pharmacology of fruit extracts. The purpose of this work is to generate a database for further analysis of the identified phytochemical and pharma-cological properties of this plant to facilitate future research. This will promote in confirmation of its conventional use alongwith its utility resulting to higher revenues from the plant. Saurabh Chhatre Tribulus terrestris, commonly called as Gokshur  or puncture vine, has been used in the Indian and Chinese systems of medical for treatment and cure of various diseases for mankind. 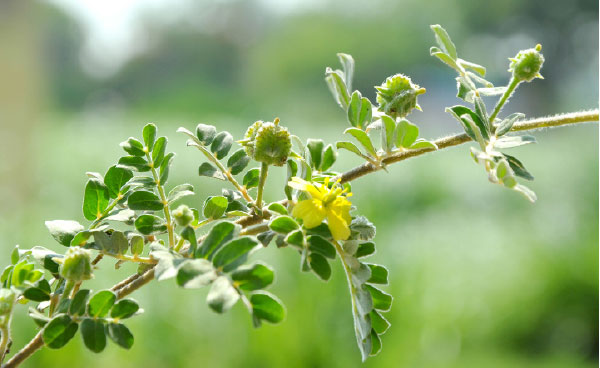 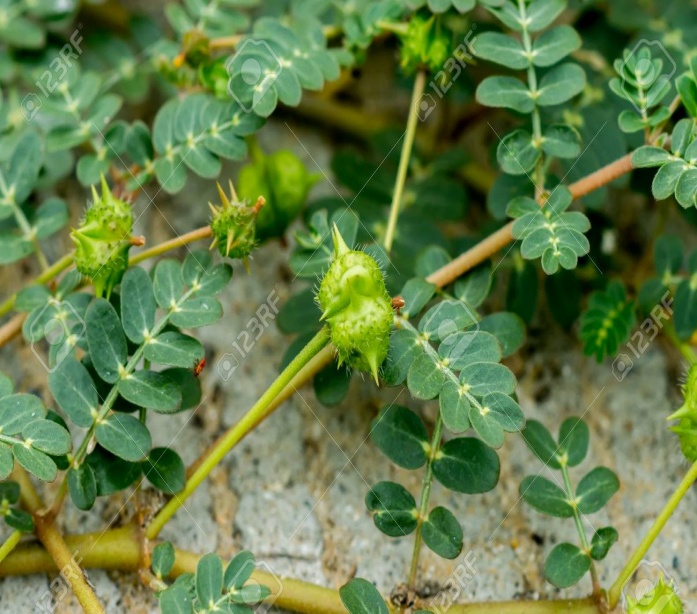 The plant parts consists of a variety of chemical constituents which are medicinally important such as flavonoids, flavonol glycosides, steroidal saponins and alkaloids. It possess diuretic, antidiabetic, absorption enhancing central nervous system, hepatoprotective, anti-inflammatory, analgesic, anticancer and antibacterial activities. The plant diversity is dominated by dicotyledons. The pharmacological uses of the plants are commonly attributed to their essential oils having more pharmacological activities such as prevention and cure of cancer and cardiovascular diseases. This kind of effects are may be due to its high structural diversity of the essential oil constituents.

At the present study, fruits of the plant, Tribulus terrestris  is collected, dried and powdered. The constituents present in the powder is to be identified by chemical tests the compounds were identified by their UV and IR spectra The anti oxidant property towards nitric oxide free radical scavenging was also studied.

The plant material collected from Kadambathur in Thiruvallur District of Chennai and the specimen was kept in laboratory of Sri Sai Ram Siddha Medical College for further process. Then the collected plant species were allowed to dry in sunshade for a period of one week and after that it was crushed into fine powdered.

About 200 gm of powder was weighed and soaked in methanol for one day (24 hrs) then it was poured in to soxhlet apparatus and allowed to boil for 1 hr. The solvent is heated to reflux. The chamber containing solid material slowly fills with warm solvent. Some of compound dissolves in the warm solvent. When the Soxhlet chamber is nearly full, the chamber is emptied by the siphon. The solvent is returned to the distillation flask. After extraction the solvent is removed, by using a rotary evaporator. The non-soluble portion of the extracted solid remains in the thimble and is removed. This extract is refereed as chloroform extract. 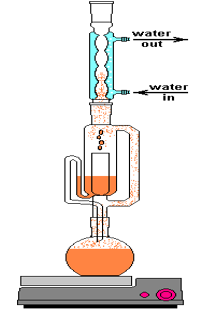 A simple straight glass tube tapered at the bottom was used as column in our study. The adsorbent was supported on a plug of cotton. The cotton piece was kept in position in the tube. The tube was then clamped vertically and a slurry of adsorbent is prepared with the extract was added in portions, so that the tube was packed uniformly with the adsorbent. The adsorbent added was pressed from above with the flattened glass rod, before the next portion was added. This was continued till nearly two third of it was filled. The column was covered by a plug of cotton wood. 10 ml Petroleum ether was added through the mouth [eluent-1]. The developed chromatogram was treated with succession of solvents having increasingly powerful eluent action. The various portions of the column were thus washed out one by one and collected in different receivers. Gradual elution using 100 ml of each solvent and solvent mixture was carried out for the collection of various fractions. The name of the solvents used and the series of fractions collected in this method are given Table 1.

The name of the solvents used

The prepared extract was subjected to phyto chemical screening. The following tests were carried out.

For detecting the alkaloids 2 – 3 ml of the extract was added with Ammonical chloroform and the mixture was stirred for one minute. Extraction of alkaloids from the extract was accomplished by shaking the solution with 0.5 ml of 2 N-H2SO4 and separation of the acid layer by means of a dropper. A few drops of solution were tested with the following alkaloidal reagents. A small quantity of the solution was placed in a glass plate and allowed to evaporate to dryness. A drop of Morquies reagent (HgCl2 + KCN) was added and the colour was observed. Appearance of Reddish colour which turns blue indicates the presence of alkaloids.

2 ml of extract was dissolved in chloroform and to this 2 drops of acetic anhydride was added and concentrated sulphuric acid was added along the sides of the test tube and the colour was observed. Appearance of red colour indicates the presence of terpenoids.

2 ml of extract was warmed and to the warmed solution a piece of Magnesium ribbon was added followed by 2 drops of concentrated HCl drop by drop. Absence of orange or yellow colour indicates the presence of flavanoids.

5 ml of extracts were dissolved in 100 ml of ethanol and tested for phytochemical components like alkaloids, Terpenoids, Flavanoids and Phenols. The following is the results obtained (Table 2).

The Table 2 shows that the extract contains alkaloids and flavonoids

The UV-Visible spectrum of the product was recorded using Labtronics UV Visible Spectrophotometer (Range 200-1000 nm) using carbinol as solvent. The absorption maxima found out in various compounds are summarized below. 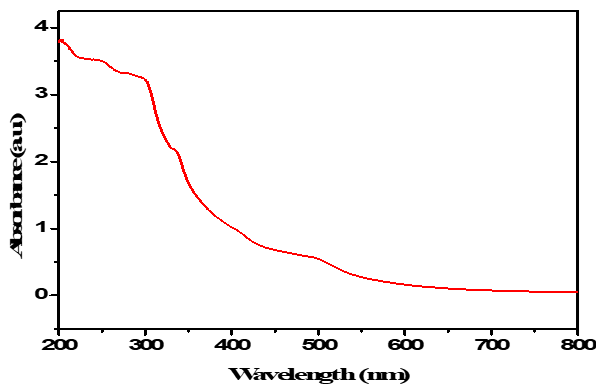 The ultraviolet-visible electronic spectra of the prepared compound showed absorption bands that could be attributed to π→π* electronic transitions These transitions are assigned in relevance to the structures of the compound.

Infrared spectroscopy is one of the most powerful analytical techniques which offers the possibility of chemical identification. The IR spectrum of the product was recorded in solid state (KBr pellet) using Shimadzu FTIR spectrophotometer. IR absorption frequencies (cm-1) of the synthesized compound are given below:

The characteristics of IR spectra 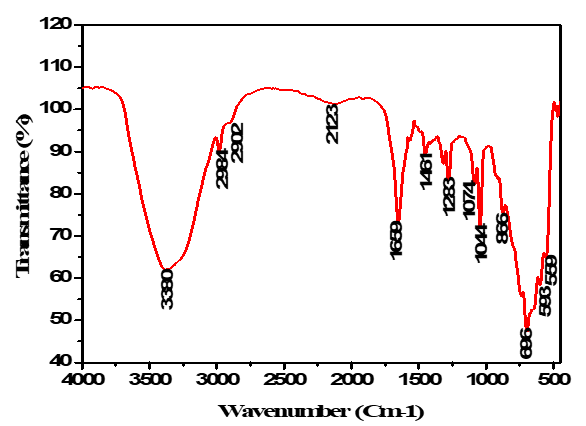 The antioxidant activity test can be conducted with a reaction mixture containing 2 ml of sodium nitroprusside with 0.5 ml of phosphate buffer saline and changing the volumes of aqueous extract (10,20,30,40,50 µg) and incubated at 25⁰C for a period of 15 minutes. After the incubation, 0.5 ml of reaction mixture added to 1 ml of sulphanic acid and allowed to stand for complete diazotization. To this 1 ml of Napthylethylene dimine dihydrochloride (NEDD) added, the absorbance of which was recorded at 540 nm and compared with standard ascorbic acid. IC50 value is the concentration of sample needed to inhibit 50% of NO radical production. The percentage of NO● radical scavenging can be calculated as per the formula given below:

Optical density of sample and standard

Table 4 illustrates the percentage inhibition of the sample. Analysis of the observed value made us to conclude that the inhibitory property of the sample increases with concentration. This is also indicated from Figure 6 which is the plot of concentration versus percent inhibition.

In the present study, Tribulus Terrestris plant was collected, dried and powdered. The powder was subjected to Soxhlet extraction using water as solvent. The extract was concentrated and the constituents were separated by column chromatography using 100% Petroleum ether, 50% Chloroform +50% Petroleum ether, and 100% Chloroform as eluent. The various fractions were collected and TLC was run with chloroform as developing solvent. The fraction which gave only one spot in TLC test was used to identify the specific constituent. Test for alkaloid, Terpenoid and flavonoids, were carried out. The phyto chemical analysis shows that it contains alkaloid and flavonoids. Antioxidant activity found to be low. It is essential. To conduct clinical trial study.to support its antioxidant property for therapeutic condition. Thus efforts need to be focus the pharmacological potential of this plant.