Ahmed and Anap: Effect of therapeutic kinesio-taping in patients with shoulder impingement syndrome: A pilot study

Effect of therapeutic kinesio-taping in patients with shoulder impingement syndrome: A pilot study

Background: Kinesio-taping is widely used in sports rehabilitation for prevention and treatment of sports-related injuries. The role of Kinesio-taping has recently received renewed interest in patients with shoulder problems like shoulder impingement or rotator cuff tendinopathy.

Objective: This pilot study was undertaken to check the effect of therapeutic kinesio-taping versus placebo kinesio-taping on shoulder pain, acromio-humeral distance (AHD), mobility and disability in patients with shoulder impingement syndrome.

Materials and Methods: 8 patients diagnosed with shoulder impingement syndrome were included in the study and they were allocated into the experimental and control group. The patients in experimental group received ultrasound therapy for 8 minutes followed by application of therapeutic kinesio-taping and in control group patients received ultrasound therapy for 8 minutes followed by application of placebo kinesio-taping. Outcome measure were pain intensity by NPRS, shoulder range of motion by goniometry, acromio-humeral distance (AHD) using ultrasonography and functional disability by SPADI assessed at baseline, immediate after taping application and 3 days post intervention. Data analyzed with Kruskal-Wallis H test and p value less than 0.05 consider as significant.

Conclusion: Therapeutic kinesio-taping found to be effective in increasing AHD, range of motion, decreasing pain and functional disability when compare with placebo kinesio-taping. It can be used as adjunct treatment option in patient with shoulder impingement.

Gleno-humeral and scapulo-thoracic muscular imbalance and differences in patterns of activation and their level of contributions may contribute for impingement syndrome.4 It was observed that impingement of shoulder may cause reduction in subacromial space which is measured by quantifying acromio-humeral distance (AHD) (linear distance between the head of the humerus and the acromion) using ultrasonography.5, 6

There are wide variety of methods to treat shoulder impingement syndrome that focus on decrease pain, functional disability and improve mobility of patients. This includes treatment: sub acromial corticosteroid injection,7, 2 cryotherapy,2 ultrasound, transcutaneous electrical nerve stimulation (TENS),8 hot pack,8 muscular strengthening, stretching,9 home exercise program,9 sensorimotor training, manual therapy,9 joint mobilization technique and kinesio-taping. There is still lack of evidences that support the superiority of one treatment over the other. Very few studies focused on AHD improvement manually which may be beneficial in management of SIS except by correcting the imbalance between the force couples through exercises.

In recent years, the use of therapeutic kinesio-taping technique become gradually popular for the treatment of musculoskeletal disorders and in patients having shoulder problems like shoulder impingement or rotator cuff tendinopathy. Kase et al (2003) had describe several benefits of taping depending on the stretch applied to the tape.10 Kinesio tape provide positional stimulus, fascial tissue alignment, sensory stimulus to assist motion, to create space by lifting up the soft tissue and fascia above the area of pain and inflammation.10

All participant presenting to physiotherapy OPD with a complaint of shoulder pain were considered for enrolment in the study. 8 participants of age group between 18- 65years, medically diagnosed with unilateral shoulder impingement following clinical criteria of onset of pain prior to 150 degree of shoulder elevation, positive empty can test that define involvement of supraspinatus muscle, positive Hawkins- Kennedy test/ Neer’s sign indicating impingement syndrome, anterior shoulder pain more than 2 months during overhead activity and NPRS ranging from 4-7 were included in the study. The exclusion criteria were participants with history of major trauma, shoulder fracture, dislocation/subluxation, any surgical procedure for shoulder within the 12 weeks, had taken steroid injection over a period of 2 months, Shoulder pain with cervical origin or cervical radiculopathy symptoms that affect the upper extremity, Patients with rotator cuff calcification, adhesive capsulitis, post traumatic stiffness and osteoarthritis of shoulder joint, Rheumatoid arthritis, Reiter’s syndrome like systemic disease and Subjects having allergy or skin irritation to kinesio-taping.

Informed written and verbal consent were obtained from all subjects before enrollment, and all rights of the subjects were protected. The institutional ethical clearance was obtained for main study. Participate in the study were screened for inclusion and exclusion criteria and patients meeting the study criteria were included in the study. Subjects were randomly assigned to 1 of 2 groups by a random-number generator and allocation was concealed. The participants of intervention group received ultrasound therapy for 8 minutes. After which therapeutic kinesio-tape was applied for deltoid, supraspinatus muscle and joint correction technique were given. Participants in control group received ultrasound therapy for 8 minutes followed by application of placebo kinesio-taping. Patient were instructed to keep kinesio-tape for three days and after which outcome measures was assessed.

The ultrasound modality in which the device is set to the “on” mode with intensity of 1.5W/cm2 and frequency of 1 MHz, using slow figure of eight movements, the transducer head was applied over the glenohumeral joint, covering an area of approximately 10 cm2 for a period of 8 minutes.

The treatment group received a standardized therapeutic KT application. The first strip of therapeutic kinesio-taping will be a Y-strip demonstrative of the supraspinatus muscle with paper off tension which was applied from its insertion to origin. Therapeutic kinesio-taping was applied with approximately 15% to 25% stretch. The strip was applied with the arm reaching behind the back as if reaching into the opposite side back pocket and the subject in a position combining cervical side bending to the opposite side.

The third strip I or a Y-strip, depending on shoulder contour. It was applied for joint correction from the region of the coracoid process around to the posterior deltoid with a mechanical correction that is about 50% to 75% stretch and downward pressure applied to the tape at the region of perceive pain or tenderness.

The Control group received neutral application of tape. The placebo taping was encompassing the application of two I-strips, that was applied with no tension. This was essentially place on the skin after the paper backing completely removed, 1 over the acromioclavicular joint in the sagittal plane and 1 on the distal deltoid in the transverse plane.

Descriptive statistics was calculated for both group at three intervals: at baseline, immediately after and three days after taping. Mean score, standard deviation, degree of freedom, confidence interval, p value and significance ware used to calculate the results. Comparison within the group was analyzed by Analysis of variance (ANOVA). All statistics data obtained from the study were analyzed in SPSS version 23.0.

A total of 8 participant with unilateral shoulder impingement syndrome were recruited in the study. Within the group analysis in therapeutic kinesio-taping group shows significant improvement in pain (p=0.0001) (Figure 1), acromio-humeral distance (AHD) (p=0.04) (Figure 2) and the effect was maintained three days after the application of taping (Table 1). Also, there is significant improvement seen in shoulder range of motion abduction (p=0.03), external rotation (p=0.001), Internal rotation (p=0.004) and SPADI score (p=0.003) after the application of therapeutic kinesio-taping (Table 1).

Table 2 shows no significant difference in all the outcome measure after placebo-taping application. 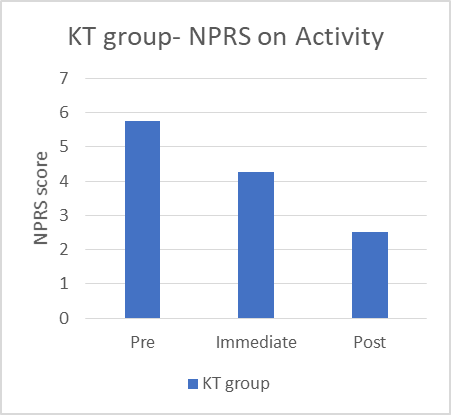 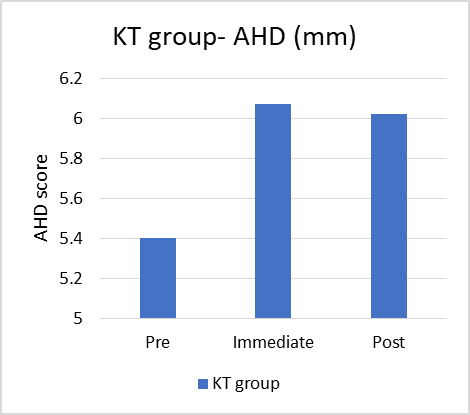 We have observed an increase acromio-humeral distance after the application of therapeutic kinesio-taping and the change was maintained for three days after the application of tape. Sorin P et al (2019)2 explained that the because joint repositioning aided by the application of kinesio-taping method was responsible for the benefits brought about in patient with shoulder pain. Mechanical correction technique of Kinesio-taping corrects the alignment of humeral head in glenoid cavity changes the moment arm of the rotator muscles and improves length tension relationship. This would release rotator cuff tendons tend from impinging during overhead movement.

In this study significant reduction in pain and increase in range of motion was seen after the application of therapeutic kinesio-taping. One of the possible mechanisms explained by various studies were that kinesio-taping provide immediate relief of symptoms, improve comfort of patient, or stability of the shoulder joint as application of taping elevates the epidermis, increasing the pressure on mechanoreceptors below the dermis, thus decreasing the nociceptive stimuli. In addition, it activates Pain modulation via the gate control theory as it stimulates neuromuscular pathways via increased afferent feedback through large-diameter Aβ fibers. Another possibility is that the improved motion might have been due to an increase in supraspinatus motor units recruited to perform the activity due to an increased proprioceptive stimulus M.D. Thalen et al. (2008).13

In our study, it was found that after application of kinesio-taping there was significant improvement seen in overall disability of the individual that is SPADI score which was significantly reduce. According to Shakeri H et al. (2013) kinesio-taping provides immediate sensorimotor feedback and correction of joint alignment during shoulder movement to improve normal gleno-humeral motion by decreasing micro trauma and mechanical irritation of the subacromial soft tissue structures, resulting in improvement in overall disability of the upper extremity.14 One of the limitation of this research is that it was the pilot study which was done to check the feasibility of further study and so the results cannot be generalized.

Therapeutic kinesio-taping found to be more effective in increasing acromio-humeral distance, range of motion, decreasing pain and functional disability when compared to placebo kinesio-taping. It can be used as optional/alternative intervention in addition to physical therapy in improving pain, joint mobility, and functional disability especially from initial stage of treatment.

I would like to thank my esteemed guide Dr. Deepak Anap, Professor and HOD, Department of Musculoskeletal Sciences, DVVPF’s COPT, Ahmednagar, who has been a constant source of support throughout the study. I would also like to thank my colleagues for guiding me as and when required during the study.

The authors report no conflict of interest.