Novel Albumin Gel-platelet-rich fibrin mixture (Alb-PRF); where do we stand?

AlbPRF is a blood by-product, without additives, using only autologous blood, which after centrifugation will be produced in two stages: heating and incorporation: heating of the serum and low platelet plasma and incorporation of cells (GF and PRF cytokines liquid, removed from the junction of the leukocyte zone and the red blood cells). This new biomaterial has already been tested in vitro and translational research with this new material has already started. Excellent results can be expected from the use of AlbPRF, not only for oral/periodontal surgery applications but also for use in facial medicine and aesthetics.

A variety of surgical procedures, biomaterials, and growth factors have been used in regenerative dentistry in either hard or soft tissues generation acceleration. While there has been significant progress in the utilization of biological agents as essential mediators of tissue regeneration, numerous drawbacks have been highlighted, including high costs and the possibility of inflammation.1, 2, 3 Nonetheless, biological agents such as recombinant human platelet-derived growth factor (rhPDGF) and bone morphogenetic protein-2 (rhBMP2) play critical roles in modern medicine for the regeneration of complicated abnormalities. Autologous platelet concentrates have also gained popularity in recent years as a low-cost restorative therapy capable of stimulating tissue neoangiogenesis.4, 5, 6

Platelet-rich plasma (PRP) was considered as a denovo-inception of platelet analogs that panders & also increases the platelet concentrations by sextuple to octaple.7, 8, 9 Early tests demonstrated that numerous essential growth factors contained in blood, such as PDGF, TGF-1, and VEGF, may be detected in greater units when compared to whole blood, favoring regulation of tissue regeneration and wound healing.10, 11, 12, 13, 14, 15

Platelet-rich fibrin (PRF) has recently been proposed as a platelet concentrate generated from whole blood without the use of anticoagulants.16, 17 Following centrifugation, PRF forms a fibrin clot and can be used as a regenerative agent with appropriate units of host platelets and leukocytes as well as autologous growth factors. Furthermore, modifications to protocols as well as centrifugation tubes have further allowed for a working liquid-PRF that may be utilized as an injectable modality similar to PRP.18

One of the most significant disadvantages of PRF has been it’s low in vivo turnover rate. The ability to act as a true barrier is limited, in regenerative dentistry because it is associated with a typical 10-14-day resorption period in vivo.19 Kawase et al. presented an intriguing attempt to use the heat-compression technique with PRF membranes for guide tissue regeneration (GTR) treatment. The heat-compressed PRF was observed for at least 3 weeks postimplantation in vivo, whereas the control PRF membranes, were completely resorbed within 2 weeks.19

Furthermore, in facial aesthetics and plastic surgery, a novel technique was developed in which platelet-poor plasma (PPP) containing roughly 60 percent albumin is heated at 75 degrees Celsius for 10 minutes to allow for the denaturation and breaking of many of the weak linkages or bonds (e.g. electrovalent bonds like H2) within its protein molecule20 in the aftermath, the proteins are redeployed into a highly compact protein-packed structure with prolonged resorption characteristics lasting up to 4–6 months.20, 21

However, despite the longer-lasting heat-treated PRF/PPP, a poorer regeneration capacity is to be predicted, because no cells/growth factors in the heat-treated PRF/PPP can withstand the denaturation process (thermal heating). For these reasons, a technique known as Alb-PRF involves reintroducing the platelet-rich layer from the buffy coat into heated PPP (albumin gel) after cooling.22 (Figure 1) 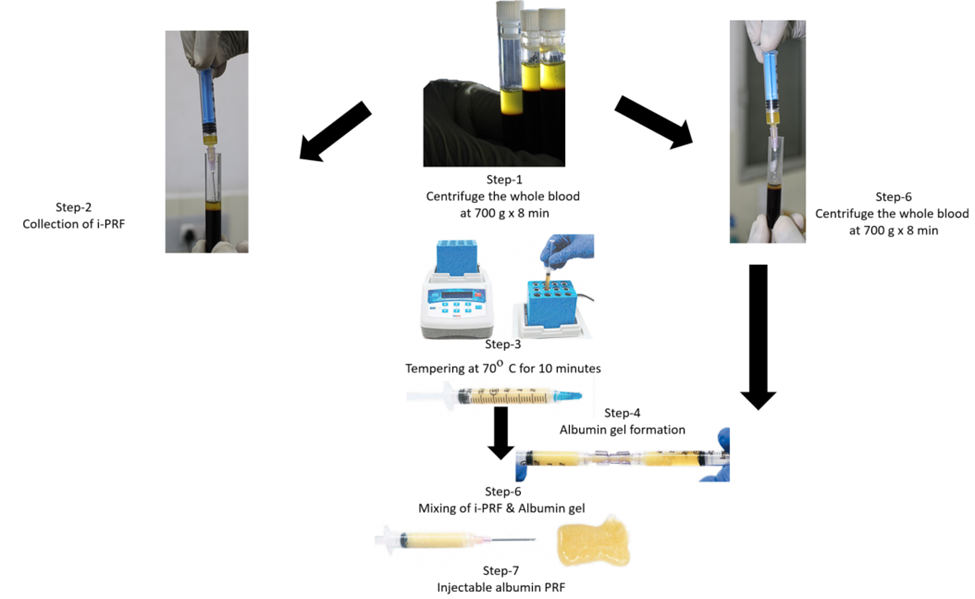 Platelet-rich fibrin (PRF) has been proposed as an autologous membrane with the advantages of host platelet and leukocyte accumulation as well as growth factor entrapment. The impediment of this is its rapid degradation properties (2 weeks). Interestingly, recent research has shown that heating a liquid platelet-poor plasma (PPP) layer can prolong the resorption characteristics from 2 weeks to more than 4 months (e-PRF) of heated albumin (albumin gel) Masako Fujioka-Kobayashi et al. set out to characterize the biological features of this unique regeneration mode. In nine-milliliter polypropylene tubes, whole blood was centrifuged at 700 g for 8 minutes. Following that, the denatured albumin (albumin gel) was obtained by tempering the platelet-poor plasma layer for 10 minutes at 75° C, to produce. Subsequently, the residual cells and the growth factor detected in the buffy coat (liquid PRF) were again mixed with the cooled albumin gel, to form AlbPRF.23

A histological investigation was then performed, including cell distribution within AlbPRF. The kinetics of seven distinct growth factors, including PDGF-AA, PDGF-AB, PDGF-BB, TGF-1, VEGF, IGF, and EGF, were studied in AlbPRF for up to 10 days. Following that, gingival fibroblast cell responses to Alb-PRF were studied using a live/dead test at 24 hours, a migration assay at 24 hours, a proliferation assay at 1, 3, and 5 days, real-time PCR for TGF- and collagen 1a2 expression at 3 and 7 days, and collagen 1 immunostaining at 14 days. Histological examination revealed that living cells were also dispersed throughout the AlbPRF formulation. Throughout the 10 days, growth factor release was sluggish and progressive, notably for TGF-1 and PDGF-AA/AB. When compared to control TCP, Alb-PRF had statistically considerably, higher cell biocompatibility at 24 hours and statistically significantly higher fibroblast proliferation at 5 days. AlbPRF also caused statistically significant increases in TGF mRNA levels, at 3 and 7 days, as well as in collagen mRNA levels at 1 to 7 days.23

The current findings suggest that AlbPRF has regeneration characteristics that are caused by the slow and steady release of growth factors contained in liquid PRF via albumin gel breakdown. Future research is needed to thoroughly define the degrading features of Alb-PRF in vivo and to investigate potential therapeutic uses in other domains of medicine.

I Medina-Porqueres P Alvarez-Juarez The efficacy of platelet-rich plasma injection in the management of hip osteoarthritis: a systematic review protocolMusculoskeletal Care201510.1002/msc.11151