Background: Diabetes Mellitus is a metabolic disorder affecting many organs and the leading cause of morbidity and mortality across the world because the disease is insidious. The diagnosis often is delayed and may affect both larger and smaller blood vessels. Prediabetes is a state of a person before the diagnosis of diabetes which is associated with many diabetic complications. The purpose of this study is to find the association of serum magnesium and uric acid levels in prediabetes.

Materials and Methods: It is a case control study where subjects with prediabetes were considered as cases and subjects with normal glucose levels as controls. The subject’s serum glucose levels, serum zinc levels and serum magnesium levels of both the groups was measured and analyzed.

Conclusion: Hypomagnesemia might be due to defective insulin receptor phosphorylation, decreased glucokinase activity and closing of potassium channels causing insulin resistance or impaired insulin secretion or both. Hyperuricemia would be due to tubular hypertrophy, oxidative stress and inflammation. Finding this relation will help us to prevent progression of prediabetes to diabetes by suitable diet, exercise and life style modifications.

Non-diabetic hyperglycemia that does not satisfy the diagnostic criteria for Diabetes Mellitus (DM) is generally known as Prediabetes.1 Without appropriate life style modifications, 15% to 30% of the patients may progress to Diabetes within 5 years. In India the incidence rate of Prediabetes is 29.5% per 1,000 persons. They are at high risk of developing type II Diabetes Mellitus, heart disease and stroke in the near future.2 Magnesium plays a major role in glucose metabolism by acting as a cofactor for several enzymes in insulin secretion, insulin binding and homeostasis. A reduction of Magnesium will increase the insulin resistance and associated with carbohydrate intolerance, hyperglycemia, insulin resistance and complications of diabetes.3, 4 Uric acid is a potent antioxidant. Hyperuricemia causes insulin resistance, enhanced oxidative stress, and endothelial dysfunction, activation of Renin-Angiotensin system which is associated with hypertension, cardiovascular risks, metabolic syndrome and abnormal glucose metabolism.5, 6 Early interventions in serum magnesium and serum uric acid levels in prediabetic stage will decrease the risk of development of frank diabetes mellitus and other complications associated with it. This study mainly focused on is there any correlation between magnesium and uric acid levels on insulin homeostasis in pre diabetes in the Indian population.

After getting informed consent, the patient was recruited in the study. A detailed case proforma was formulated and filled followed by which 5ml of venous blood sample was collected in fasting state. Then serum was separated and biochemical analysis of the following parameters was estimated using an automated (Beckman coulter) clinical chemistry analyzer- (1) Serum uric acid estimated by Uricase method, (2). Serum magnesium estimated by Calmagite calorimetric method, (3). Fasting Glucose analyzed by GOD-POD enzymatic method. The collected data was organized in the standard proforma and statistical analysis was done using SPSS package. Spearman’s rank correlation was used for universal analysis. The groups are compared analysis of variance and t test. P < 0.05 was considered to be significant.

50 cases and controls were selected and blood samples were taken and analyzed. The statistical values of the analytes were analyzed by SPSS package and the significant values were obtained by the Independent Sample ‘T’ test and are tabulated below.

The study had 52% of females and 48% of males from the enrolled participants. The prevalence of Prediabetes is more among females.

The uric acid value is higher in cases than in controls. But mean values aren’t high to determine that cases were having hyperuricemia.

Comparison of Serum Magnesium among cases and controls 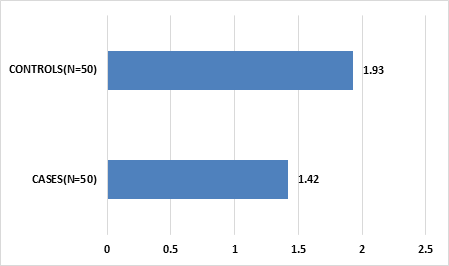 Comparison of Serum Uric acid among cases and controls 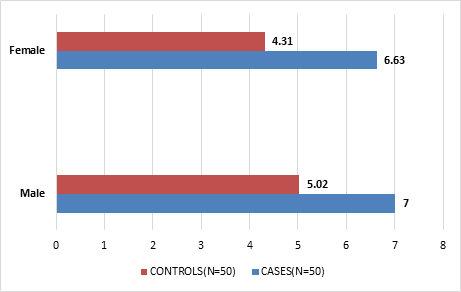 In our study, the percentage of pre diabetes is 52% and 48% among women and men respectively. Increased prevalence of pre diabetes in women, especially post-menopausal, may be due to excess abdominal fat accumulation. This is associated with low grade inflammation of white adipose tissue (physiological site of energy storage as lipids) resulting in chronic activation of innate immunity and which can subsequently lead to insulin resistance, impaired glucose tolerance. The above-mentioned process also down-regulates adiponectin which is an Insulin-sensitizing effector. Hypoadiponectinemia further leads to insulin resistance.8

The mean of the Serum Magnesium level in cases is 1.42±0.54 and that of controls is 1.93± 0.44 which is statistically significant. Osmotic diuresis causing high renal excretion of magnesium, insensitivity of insulin affecting intracellular magnesium transport leading to increased loss of extracellular magnesium, and reduced tubular reabsorption due to insulin resistance leads to hypomagnesemia in Prediabetic population. Further, reduced intracellular magnesium concentrations result in defective tyrosine-kinase activity, postreceptorial impairment of insulin action and worsens the Insulin resistance and add to Prediabetes.

The mean of the Serum Uric acid levels in cases among males and females are 7±1.95, 6.63±1.71 respectively and that of controls is 5.02±0.98, 4.31±0.87 which is statistically significant. Prediabetes is characterized by hyperinsulinemia, which synergistically activates RAS and subsequent increase in Angiotensin II, renin and aldosterone. Hyperinsulinemia promotes sodium and water retention, which increases blood volume and pressure which in turn activates reabsorption of uric acid resulting in elevated Serum Uric acid. A study by Bedir A et al,9 have recently discussed the role of leptin as possibly being a regulator of Serum Uric Acid concentrations in human and even suggest that leptin levels are elevated and associated with insulin resistance. Further Hyperuricemia may in turn has a direct impact on Pancreatic Beta cells through increased synthesis of NF-κB, which increases apoptosis, increased Inducible Nitric oxide synthesis and damages the pancreatic cells and further adds to the burden.

Study on pre diabetes identifies a heterogeneous patient population, characterized by the presence of insulin resistance or beta cell dysfunction or both. Pre-diabetes may lead to diabetes which in turn leads to many cardiovascular risk factors, nephropathy and neuropathy. Hypomagnesemia may be due to defective insulin receptor phosphorylation, decreased glucokinase activity and closing of potassium channels causing insulin resistance or impaired insulin secretion or both. Hyperuricemia may be due to tubular hypertrophy, oxidative stress and inflammation. Finding this relation may help us to prevent progression of prediabetes to diabetes by suitable diet, exercise and life style modifications. As the Pre-diabetic patients are mostly asymptomatic, estimation of serum magnesium and uric acid, a simple and inexpensive test, that can even be done at primary healthcare centers, might help to identify disturbance in glucose metabolism and people who are at an increasing risk for development of Type II Diabetes without the need of many complex expensive tests. This early detection may prevent the progression of pre diabetes to diabetes and reduce the complications in Pre-diabetic patients with Proper health care and Life style modifications.