Krishna, Devi, Harini, Rao, and Viswakumar: Prevalence of obesity and its association with stress levels among undergraduate medical students

Background: The burden of obesity and its related disorders is growing to an epidemic form, particularly among young adults, both in the developing and developed countries. Pursuing medical education is considered stressful throughout the course of the training. Stress leading to disordered eating habits along with lack of physical activity tend to make medical students more prone to obesity related disorders. The present study was carried out to find out the prevalence of overweight and obesity and its association with stress among medical undergraduates.

Materials and Methods: This cross-sectional study was conducted at Narayana Medical College, Nellore, Andhra Pradesh. After obtaining approval from the Institutional ethics committee, both male and female students were invited to participate. Data on age, gender, type of diet, physical activity, consumption of junk food and other habits were collected. Cohen’s perceived stress score questionnaire was used to quantify the level of stress.

Results: Among 170 students, about 18.2% (n=31) of students were obese and 8.2% (n=14) were overweight. The mean stress score was 17.2 (± 4.72) and about 78% (n=133) reported to have stress with scores > 13. There was a significant association between BMI and consumption of junk food and a mild positive correlation existed between BMI and perceived stress score index(PSSI) among first year medical undergraduates.

Overweight and obesity contribute as the fifth leading risk factors for global deaths. At least 2.8 million adults die each year as a result of being overweight or obese.1 Obesity is emerging as global pandemic affecting various age groups. Among the factors that contribute to obesity, stress seems to be more important as stressful state can lead to altered eating patterns, lack of exercise, addiction to illicit drugs, and all being independent factors of overweight/ obesity.2 Students pursuing medical education are prone to psychological stress owing to its long duration training, apart from the pressure of the examinations and staying away from home.3 Therefore, we aimed to assess the prevalence of obesity among first year medical undergraduates and its association with perceived stress.

The study was conducted in Narayana Medical College, Nellore, A.P. After obtaining Institutional ethics committee approval, informed written consent was obtained from the willing participants. Data on the age, gender, type of diet, physical activity and smoking/alcohol consumption were collected. Cohen’s 10-item stress questionnaire (PSS-10) was used to assess the level of stress. The students were asked to respond about their feelings and thoughts in the past one month, as to how often they felt a certain way. Responses were captured on a Likert scale from 0 to 4, with zero for never to 4, for very often. Positively worded question items (Q.no. 4, 5, 7 & 8) were reverse scored and then all scale items were summed up. Higher scores indicate higher level of perceived stress.4 Confidentiality of information was strictly maintained.

Anthropometric measurementsHeight (mt.) was measured using a stadiometer with the participant in standing position and values measured were adjusted to the nearest 0.1 cm. Weight (kg.) was measured by a digital weighing scale, which was first calibrated using a standard weight and rechecked daily. Body mass index (BMI) was calculated using the formula - Weight (kg)/ Height2 (mt). Using the WHO classification, BMI of less than 18.5 was considered as underweight, 18.5-24.9 as normal, 25-29.9 as overweight and BMI of 30 Kg/m2or more as obese.5

Statistical analysis was done using SPSS version 20.0v licenced to the institute. Continuous variables were expressed as mean and standard deviation. Prevalence of overweight and obesity was calculated using percentage. Chi-square test was used to find association between categorical variables. Spearman’s rho correlation test was used to find association between BMI and stress score as the data was not normally distributed (Shapiro-Wilk test). A p value of less than 0.05 was considered statistically significant.

Univariate analysis of factors associated with BMI is described in Table1. It was observed that there was no significant association between BMI and gender, type of diet, frequency of consumption of non-vegetarian food and physical inactivity. However, frequency of junk food consumption was significantly associated with BMI with higher proportion of the obesity and overweight noted among those who consumed junk food more frequently (Table 1).

We also observed a mild positive correlation between BMI and Cohen’s stress score (P value 0.087) which was not significant statistically (Figure 1). 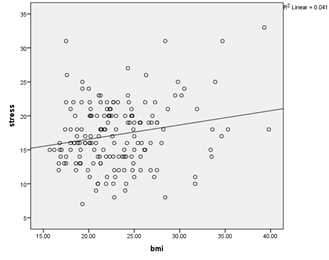 For the past decade, occurrence of overweight and obesity are very high affecting both developed and developing countries like India. Overweight and obesity among college students is an important issue as height by this age is stabilised. India is currently in a transitional phase between developing and developed countries.6 In the present study, the prevalence of overweight and obesity was 18.2% and 8.2% among the first year medical students. Gopalkrishnan S et al noted prevalence of pre-obesity as 15.9% and obesity as 5.2% in a study conducted on medical students from AMIST university, Malaysia.7 Deotale MK et al. reported a prevalence rate of overweight and obesity as 14.7% and 3.3%, in their study on medical students.8 Soma Gupta et al. reported an overall prevalence of overweight and obesity as 17.5% and 3.4% respectively, among the medical students in West- Bengal.9 This depicts that the prevalence of obesity among medical students in India is alarmingly high. A variety of factors like altered dietary patterns, genetic predisposition, lack of physical exercise and other behavioural factors can lead to obesity in adults. In our study there was no significant association between BMI and type of diet, frequency of non-vegetarian food intake similar to a study conducted by Kevin Fernandez et al. among medical students of a teaching hospital in Pune.6 Various researchers have shown that the junk food consumption and snacking leads to development of overweight /obesity.10, 11, 12 Similar to these studies we noted strong association between BMI and junk food consumption in our study. Awareness should be created among students regarding adverse effects of junk food and associated complications of being overweight/ obesity. It is evident from research that addition of exercise to diet restriction can decrease weight gain and thereby developing obesity. Physical Exercise increases metabolic rate and energy production, depending on intensity and duration of physical activity. During exercise carbohydrate is utilised first, followed by stored fat for energy production. The negative calorie balance ultimately leads to decrease in body weight. In our study no association was noticed between physical activity and obesity. Similar observations were noted by Boo NY et al.13 Medical students undergo a lot of stress throughout the course of training. We have noticed mild positive correlation between BMI and perceived stress score index(PSSI), which is in accordance with one of the studies where there was no correlation noted between BMI and stress14 but in contrast to other studies.9, 15 This could be attributed to smaller sample size. The causality can be established with more robust study designs.

The prevalence of obesity is high among medical students. Lifestyle modification programs like awareness regarding healthy dietary habits and regular physical exercise, yoga should be implemented which would help students to overcome stress and prevent obesity related health hazards.

Authors acknowledge the cooperation extended by all the study participants.

World Health Organziation. Obesity: Preventing and managing the Global Epidemic - Report of a WHO consultation on obesity, Executive Summary. 1997

MK Deotale U Ranganathan SV Akarte Prevalence of overweight and obesity among medical students and their knowledge, attitude and practices about obesityInt J Sci Rep201511749