Axita C, Stephen, and Nadasha T: Estimation of serum levels of magnesium in antenatal women in a tertiary health centre

Context: Magnesium is an important macrominerals required for various functions in our body and also as a cofactor for several enzymes. Magnesium deficiency in pregnancy due to decreased intake or increased demands may lead to complications like eclampsia, pre eclampsia, IUGR, gestational diabetes mellitus, low birth weight etc. Hence we aim to estimate magnesium levels in antenatal women attending a tertiary care centre in North Kerala.

Aim of Study: 1. To estimate the levels of Serum Magnesium in antenatal women. 2. Compare the level of Magnesium with Hb, random blood glucose and Blood Pressure levels. 3. Determine sociodemographic profile of antenatal cases.

Settings and Design: This observational study was conducted in department of Biochemistry, GMC, Kannur from February 2020. All antenatal cases attending OBG OPD, GMC, Kannur, age between 18-35 years were included in the study while women with comorbidities and pregnancy complications were excluded from the study.

Results: Total 30 patients were selected in this study. The age of patients ranged from 20 to 36 years with mean age 27.83 + 4.53 years. The mean Magnesium level in the study participants was 1 + 0.32 mg/dl. In our study participants reported 0 still birth, and 2 (6.7%) had abortions. Majority of them 90% had oedema of lower limbs. Participants had no history of pre-existing illnesses like hypertension hypercholesterolemia, diabetes mellitus, hypothyroidism, etc. There was a week positive correlation of Magnesium with systolic and diastolic blood pressure, and by comparing the levels of Magnesium with Haemoglobin and Blood pressure, they are not significant.

Conclusion: Determination of Magnesium deficiency in the pregnancy can help in initiating appropriate supplementation and prevention of untoward complications, associated with Magnesium deficiency. Also, such studies, have not been conducted in this part of Kerala and will help to provide more information related to the topic.

Magnesium (Mg) is a critical mineral in the human body governing the activity of hundreds of enzymes encompassing ~ 80% oh known metabolic function.1 Magnesium helps keep blood pressure normal, bones strong, and the heart rhythm steady. It contributes to bone matrix development and is required for the synthesis of biomacromolecules including DNA, RNA, and protein.2 Only 1% of magnesium is found in blood, but the body works very hard to keep blood levels of magnesium content. Magnesium is primarily found within the cell,3 where it acts as a counter ion for the energy rich ATP and nuclear acids. Magnesium is a cofactor in more than 300 enzymatic reactions. Cunnjinghan et al revealed that Magnesium contributes to the regulation of vascular tone, heart rhythm, platelet activated thrombosis and bone formation.4 Magnesium works with many enzymes to regulate body temperature, synthesis of nucleic acids and proteins as well as role in maintaining nerve and muscle cell electrical potentials.5

Spices, nuts, cereals, cocoa, and vegetables are rich source of Magnesium. Magnesium absorption occurs primarily in the ileum and colon. Magnesium intake depends on the Magnesium concentration in drinking water and foods. Intravenous or injected Magnesium is used to treat eclampsia during pregnancy and severe asthma attacks. Magnesium is the main ingredient in many antacids and laxatives. A daily intake (DI) of 300mg for men and 270mg for women, is necessary to maintain Magnesium balance under typical physiological conditions.6 The normal range for blood Magnesium level is 1.7 to 2.2 mg/dl (0.85 to 1.10 mmol/l).7 Dietary intake studies during pregnancy consistently demonstrate that many women especially those from disadvantaged backgrounds, have intakes of Magnesium below the recommended levels8 and in different trimesters the levels of magnesium vary slight different.

Magnesium has established its role in obstetrics with its relationship to both fetal and maternal well-being. Magnesium is one of the important mineral which is required for cell multiplication in a growing fetus and is an essential element of life chemistry, keeping a balanced neuromuscular system.9

The maternal serum Magnesium concentration rises slightly in early pregnancy, returning to non-pregnant levels by end of pregnancy.10 Maternal levels are slightly below and correlated with those of the infant at delivery.11 Magnesium is probably actively transported to the fetus.12 The normal fetus contains 1g of Magnesium, which is acquired primarily during the last 2 trimesters at a rate of about 6mg/day.

In pregnancy period Magnesium level declines from a preconception mean of 0.93 mmol/L to 0.63mmol/L, in the third trimester.13 A study measuring serum Magnesium during low risk pregnancies reported that both ionized and total serum Magnesium were significantly reduced after the 18th week of gestation compared to measurement before this time.14 Common causes of Magnesium deficiency include inadequate dietary intake or gastrointestinal absorption, increased losses through the gastrointestinal or renal systems, and increased requirement of Magnesium, such as in pregnancy.15 Pregnant women tend to have low magnesium level than non-pregnant because of increased demand of mother and growing fetus and increased renal excretion of magnesium i.e. 25% more than non-pregnant women due to increase GFR (glomerular filtration rate) in the second and third trimester.16 Suggested reason for the low levels of Magnesium in pregnancy include inadequate intake, increased metabolic demand of pregnancy, especially as gestation advances, physiological haemodilution in pregnancy, and increasing parity.10 Therefore the serum levels of total magnesium during normal pregnancy seem inconclusive. Studies from different regions report a decline in Magnesium levels during pregnancy with values reaching their lowest point at the end of the 1st trimester. Seasonal fluctuations (5% lower in summer) in maternal blood levels were reported in some studies,17 but not in others.18 In 1977 Reitz et al;19 observed that the maternal serum Magnesium concentration rises slightly in early pregnancy, returning to non-pregnant levels by late pregnancy.

Various studies have focused on the effect of Magnesium on prevention or treatment of various pregnancy complications or pathological conditions in pregnancy period. Dietary intake studies during pregnancy consistently demonstrate that many women have intake of Magnesium below recommended levels.

It has also been declared that benefit of Magnesium during pregnancy is noticeable, and Magnesium supplementation prevents many ill effects in pregnant women. Duley in 201021, 22 observed that the beneficial effect of Magnesium in oral Magnesium supplement group included decrease in pre-eclampsia, lower pre-term birth, as well as lower rate of LBW. Likewise, Magnesium compounds like MgSO4 were found to be efficient for pre- eclampsia and eclampsia.

In his observational study, Shaikh et al found that in pregnancy outcomes such as toxaemia of pregnancy, preterm birth, intra Uterine Growth Restriction (IUGR), and leg cramps, pregnant women with hypomagnesemia have more frequent complications than normal groups.23 Numerous studies assessed the effect of Magnesium supplement in preventing increase of diastolic blood pressure during the last weeks of pregnancy.24

Pathak et al.10 reported that higher parity was associated with higher rates of lack of magnesium among rural Indian women in a community based cross-sectional study. However, Kapil et al25 studied urban Indian dwellers and reported Magnesium deficiency in only 4.6% of all pregnant women included in the study.

Many studies showing that magnesium levels decline as pregnancy advances have also reported improvements in magnesium status with supplementation leading to significant improvement in maternal and perinatal outcomes.19, 26 In a retrospective study of medical records, Conradt 1984 reported that Magnesium supplementation during pregnancy was associated with a reduced risk of foetal growth retardation and preeclampsia.27 Magnesium intake plays a crucial role in magnesium status; hence, a positive magnesium balance can be readily achieved through supplementation or consumption of a magnesium-rich diet consisting of green leafy vegetables, legumes and soya milk.28 Considering the level of poverty and other social deprivations in our environment, it is important to examine the significance of magnesium deficiency in pregnancy vis-a-vis maternal and perinatal health.26

This observational study was conducted in department of Biochemistry, GMC, Kannur from February to May 2020.

The present study was a pilot approach to estimate the serum levels of magnesium in antenatal women in a tertiary health center. The questionnaire comprised of sections to elicit information regarding the general biodata of the patients as well as specific information.

The mean Magnesium level in the study participants was 1 ± 0.32 mg/dl. 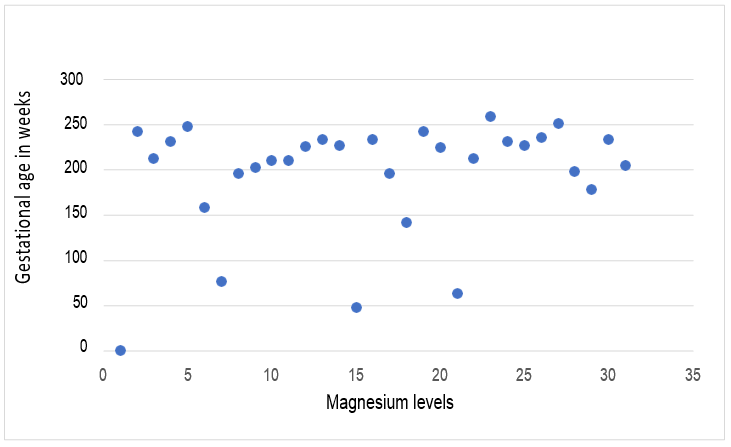 Period of gestation of study participants

In our study participants reported 0 still birth, and 2 (6.7%) had abortions.

Majority of them 90% had oedema of lower limbs. Participants had no history of pre-existing illnesses like hypertension hypercholesterolemia, diabetes mellitus, hypothyroidism, etc 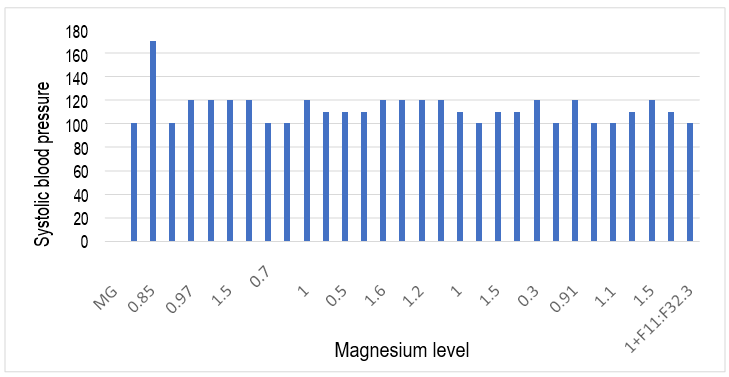 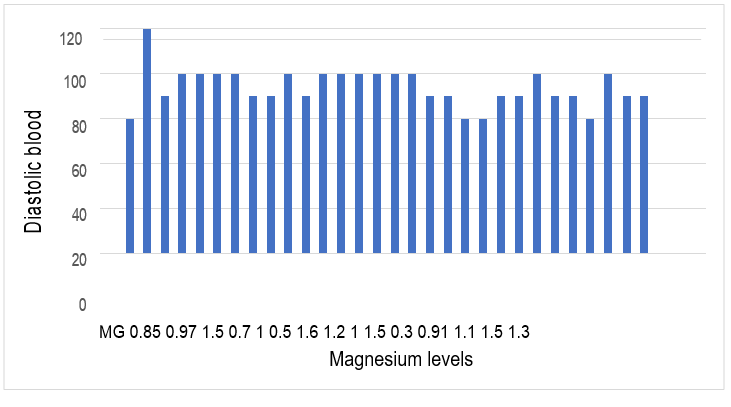 Correlation of magnesium with various variables

In pregnancy micronutrients including Magnesium are important for normal growth and development of baby. Deficiency of Magnesium in mothers can impact not only the health of mother but their babies too. The formation of new tissue (maternal and foetal) during pregnancy requires high Magnesium intakes than that of the normal non-pregnant women of comparable age.29 Magnesium deficiency in pregnant women is an important risk factor for the complications which can be prevented by timely detection and proper management. Dietary deficiencies of Magnesium during pregnancy have been implicated in pre-eclampsia, Eclampsia, pre-term birth, and intrauterine growth retardation.30 Magnesium supplementation is important for prevention of pregnancy associated complications.

We conducted this study to find out the serum levels of Magnesium in normal pregnant women’s, and we observed a non-significant reduction in serum Magnesium during the progression of normal pregnancy. This observation is supported by Zohrch and Sara31 and Deeper V Kanag et al.32

Insufficient Magnesium intake is common, especially in low income regions. Adolescents and women are more prone to Magnesium deficiency. Serum magnesium concentration in mothers ranged from 0.59 mmol/l to 0.95 mmol/L during gestation, from 0.54mmol/L to 0.86mmol/L before and during labour and from 0.54 mmol/L to 0.90 mmol/L at delivery.14

Punthunapol and Kittichotpanich showed that there was no difference in serum Magnesium among normal pregnancy and both mild and severe pre-eclampsia.36 Kumru et al., in their study found that Magnesium concentration showed no significant difference.36

Bullarbo et al., in a clinical trial designed study concluded that Magnesium supplementation prevents increasing of diastolic blood pressure during last weeks of pregnancy.20 Rudnecki et al., in a double blind randomized controlled study found that using Magnesium chloride until the end of pregnancy has a positive effect on decreasing of blood pressure during pregnancy and delivery time.43

In our study we also compare the level of Magnesium with blood sugar and haemoglobin, and they are not significant. Simmons et al., reported that hypomagnesemia is associated with known diabetes, but in patients who were newly diagnosed with diabetes, the relationship is not significant.47

Magnesium supplementation among women with GDM had beneficial effects on metabolic status and pregnancy outcome in a study by Zatollah Asemi et al.48 The role of Magnesium lack in preterm birth has been documented previously by Shahid et al.,49 who conducted that this observation can be useful as an indicator of pre-term delivery.

Determination of Magnesium deficiency in the pregnancy can help in initiating appropriate supplementation and prevention of untoward complications, associated with Magnesium deficiency. Also, such studies, have not been conducted in this part of Kerala and will help to provide data related to the topic.

A Conradt H Weidinger H Algayer On the role of magnesium in fetal hypotrophy, pregnancy induced hypertension, and pre-eclampsiaMagnes Bull198466876