The stress response involves the activation of both the sympathetic-adrenal response and the hypothalamic-pituitary-adrenal axis. During times of increased stress, the adrenal gland is stimulated to produce increased levels of hormones. Cortisol, the main hormone involved in the stress response, is secreted in increased amounts within minutes of a perceived stressor. Cortisol secretion can increase as much as 20-fold and has several important physiological effects. Short-term surges in cortisol levels can suppress inflammation and at the same time suppress immune function. Though inflammation control is important, surges of sustained levels of cortisol are not healthy and ultimately lead to premature aging, degenerative disease, and increased susceptibility to cancer. Studies show that psycho-social stress activates the hypothalamus-pituitary-adrenal axis causing an increase in morning cortisol levels, which correlated to the subjects reports of increased fatigue and anxiety. Although this stress response is important for survival during an acute stressor, prolonged activation of the stress response may lead to adrenal exhaustion in which cortisol levels drop to insufficient levels resulting in fatigue or illness. Many herbs have been shown to impact adrenal function. Adaptogens are plants that produce a non-specific response improving the physiological resistance to stressors. These herbs are often used in the context of adrenal support formulas to balance adrenal hormone levels. It is believed that adaptogenic herbs can increase low levels of adrenal hormone or decrease levels that are elevated. Additionally, these herbs provide balancing activity on many body systems that are impacted by stress, such as the immune response and blood sugar control.

In the present study, we have evaluated the efficacy of ethanolic extract of Ocimum sanctum 47mg/kg p.o, Withania somnifera 23 mg/kg p.o and Bacopa monnieri 23 mg/kg p.o on plasma cortisol level in mice subjected to swim endurance test and cold restraint stress. The standard group was administered water-soluble root powder of Panax ginseng 100 mg/kg p.o and the stress control group was administered distilled water orally for 7 days. It was found that mice pretreated with ethanolic extracts of Ocimum sanctum, Withania somnifera and Bacopa monnieri showed a fall in the plasma cortisol level. The standard group also showed a significant decrease in the plasma cortisol level compared to the stress and normal control groups.

Adaptogens are natural substances found only in a few rare plants and herbs that normalize body functions, strengthen systems and functions compromised by stress and have a protective effect against a wide variety of environmental and emotional stress. Ultimately, they are proposed to reduce chronic stress and fatigue through the adaptation of stress. Adaptogens have been around in Chinese functional medicine and Indian Ayurveda medicine since ancient times.1 They became more popular during world war II when Russian scientists were looking to improve soldiers stamina through herbal medicine.2, 3, 4, 5, 6, 7, 8, 9

Adaptogens are similar to catecholamines, neurotransmitters involved in stress situations. Common catecholamines are adrenaline, epinephrine, dopamine and norepinephrine. Since, adaptogens are mild stressors the theory is that they build the body’s immunity up to be able to adapt and control future severe and moderate stress situations. These stress-protective effects mainly help the Hypothalamus-Pituitary-Adrenal Axis and SAS system. They are responsible for controlling the body’s stress responses during times of stress – mental health disorders, traumatic injury, exercise, eating disorders, surgery, malnutrition and low blood sugar amongst other conditions.10 Adaptogenic drugs are found in the most diverse families, they are distinctly different in their pattern of constituents.

Holy basil (Ocimum sanctum) is an adaptogenic herb, one of the primary botanicals used in Ayurvedic medicine to modulate a physiological stress response and to increase adaptive energy. Traditional Ayurvedic use for anti-stress activity has been verified by numerous animal clinical studies.12, 13 A variety of studies have shown sacred basil to support the health of the cardiovascular, immune and digestive systems acting as an effective remedy to help ease stress-related conditions, including hypertension, lowering cortisol levels, mood disorders and peptic ulcers.12, 14, 13, 15

Ashwagandha (Withania somnifera) has antibacterial, antitumor, anti-inflammatory and immunomodulating properties. A separate study also showed immunomodulatory (harmonizes immune function) effects, including a positive effect on the central nervous system. These tests show strong anti-stress actions, increasing memory and learning capabilities.16 The active constituents of Withania somnifera have been shown to reduce or modulate increased levels of circulating adrenocorticotropic hormone (ACTH) and the concurrent increase in glucocorticoid levels (cortisol) to normal levels which may protect the body from the deleterious effects of chronic stress.17, 18, 19, 20

Brahmi (Bacopa monnieri) is used in a vast range of diseases. Brahmi is one of the best nervine tonic and is widely used in treating epilepsy, hysteria etc. Bhahmi acts as a powerful brain food, and is known for its ability to enhance mind power.21, 22 It supports and improves all aspects of mental functioning including comprehension, memory and recollection.23, 24, 21, 22 It is important because it also enhances crucial coordination of these three aspects of mental functioning. As it increases the ability to solve problems effectively, Brahmi is often used in formulas to help relieve and prevent stress.25, 26, 27, 28

Plant material leaves of Ocimum sanctum, Withania somnifera and roots of Bacopa monnieri were collected, dried in shade, and finely powdered. The powder was soaked in absolute ethanol (95%) and left for 48 hours. The supernatant was collected and the residue was further soaked in absolute ethanol (95%) for 24 hours. The supernatant was collected and filtered. The filtrate was subjected to Rotavapour extraction at a temperature below 60oC for 24 hours. The concentrated form of the extract was obtained and freeze-dried.

The study was conducted on healthy, adult, male albino mice having a body

weight of 35 + 5 g. They were acclimatized to laboratory condition for 2 weeks prior to experimentation. Animals were housed in propylene cages (6 mice/cage) in a mice experimentation laboratory at a temperature of 25oC + 2oC with 12 – 12 h dark - light cycle. They were provided with standard food and water ad libitum. Institutional animal ethical committee (I.A.E.C) approval was obtained before the experiment and care was taken to handle the mice in humane manner. All the chemicals used in the present study were obtained from Euro Diagnostics (Mumbai, India), India Scientific Company (Patna, Bihar) and Bihar Scientific Corporation (Patna, Bihar).

The adult animals (8 weeks old) were divided into 4 groups (n = 6 in each group) as follows: Group I consisted of Normal control (NC), these mice remained undisturbed in the home cage throughout the experimental period. Group II consisted of Stress control (SC), which were fed with equivolume of distilled water orally for 7 days. Group III (Stress+P.ginseng) consisted the standard group, these mice were fed with aqueous root powder of Panax ginseng (p.o) for 7 days.

On the 8thday, the animals were allowed to swim till exhausted in a propylene tank of dimension 24 cm* 17 cm* 14 cm, filled with water to a height of 10 cm. The end point was taken when the animals drowned and ‘swimming time’ for each animal was noted. The mean swimming time for each group was calculated and the data was statistically analyzed (Kumar et al., 1999).

On the 8th day, the animals were individually placed in plastic containers of capacity 350 ml. They were immobilized in their normal position, using adhesive tape. The containers were placed in a cold chamber maintained at 4oC for 2 hours. The blood was collected by orbital sinus veinpuncture method in a heparinised tube and plasma cortisol was determined by Enzyme Linked Immunosorbent Assay (ELISA).

Data was analyzed by the application of One way analysis of variance (ANOVA) using Graph pad in stat software. P<0.01 was considered to be significant. 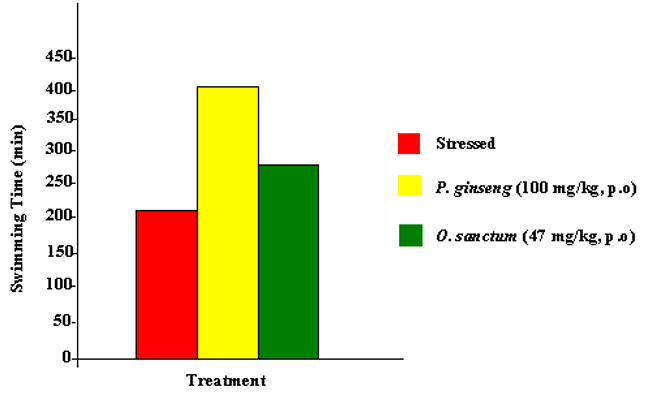 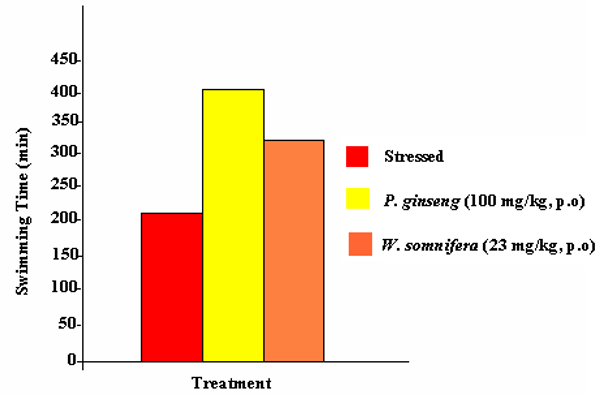 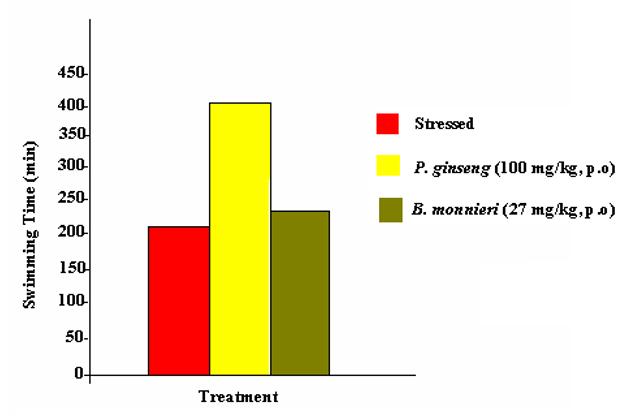 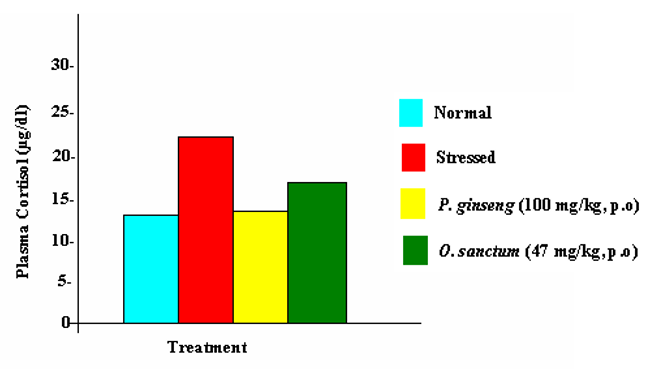 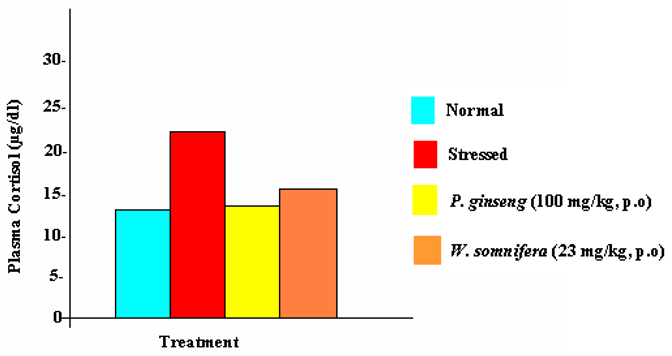 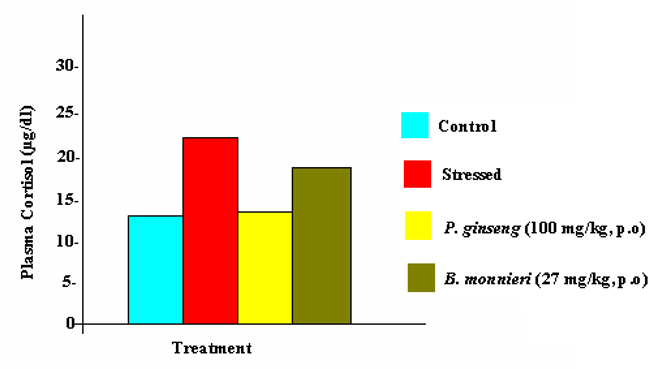 Though the hypothalamus is traditionally considered the source of corticotropin-releasing factor (CRF), this neurotransmitter hormone and its receptors are also found in the gastrointestinal tract, skin, adrenal gland, testis, cardiac muscle, thymus and spleen.11, 20, 29 These particular tissues are also involved in the development of disorders related to heightened stress sensitivity and dysregulation of stress-coping mechanisms such as anorexia, diabetes, loss of libido, heart disease and immune pathologies.25 It is well-established that CRF is negatively regulated by cortisol and that heightened stress sensitivity and dysregulation of stress-coping mechanisms appear to involve regulatory mechanisms of CRF.30

It has been shown that some herbal formulas can inactivate the secretion of CRF in rats by inhibiting CRF mRNA (mitochondrial) expression. Preventing the synthesis of CRF would help ameliorate the negative effects of CRF, which would mimic the regulatory role of cortisol.20, 1 This is, perhaps, one of the most likely mechanisms of actions of herbs having adaptogenic properties. Thus, adaptogen remedies may be mimicking cortisol, adrenaline, or possibly ACTH or CRF, in a way that does not cause the same deleterious effects in stress dysfunction cascades, yet somehow tricks the body into thinking these endogenous substances are being supplied in a normal way. This mechanism may modulate allostasis and lower allostatic overload.25, 31

Remedies with an adaptogenic property must attenuate or prevent the initial dysfunction of neurotransmitters and hormones by increasing resistance to stress and in addition, attenuate or prevent pathological conditions resulting from the dysfunction.23, 32 Adaptogens increase the organisms ability to maintain both homeostasis and allostasis.33

Cortisol is often referred to as the stress hormone and it is involved in the response to stress.25 As cortisol has an immunosuppressive action, balance and systemic equilibrium of the adrenal glands can in turn, positively contribute to good metabolic rate, a strong immune system, healthy energy levels and normal sleep states.20 Overall health, as well as the well being and optimum functioning of the adrenal glands should be addressed. Relaxation methods, as well as eating a healthy, balanced diet and exercising regularly can all be of great benefit to adrenal health and harmony.11 Natural remedies have been used in traditional medicine for thousands of years to support the solid health of the adrenal glands, helping to encourage healthy and efficient adrenal function.4, 5, 1

The author is thankful to the Department of Biochemistry, Patna University, Patna, for all necessary support.