The World Health Organization (WHO) reports on six major air pollutants, namely particulate matter, ground level ozone, carbon monoxide, sulfur oxides, nitrogen oxides and lead. Effects of these pollutants are seen in air, soil and water. This air pollutant possesses different impact on the human health, climate changes, green-house effects and global warming. Acid rain, global warming, greenhouse effect and climate changes have an important ecological impact on air pollution. Neurological effects have been observed in adults and children after exposure to air pollutants. Man is causing damage to air, water and soil. Our atmosphere on global scale is highly polluted. In this paper, our interest is mainly to focus on these pollutants, as they are related to more severe problems in human health and environmental impact.

The term pollution may be defined as the introduction of any toxic chemical substances into environment that bring about adverse effects to living organisms.1, 2, 3, 4, 5, 6 At higher level of concentration pollutants are harmful that reduce the quality of our life. The environmental pollution can be considered as an international health issue with many folds. Clearly population growth, urbanization and anthropogenic activities are the main causes for air pollution which resulting the biggest public health hazards, globally accounts for about 9 million deaths per year.7, 8, 9, 10 Developmental activities have an adverse effect on the surrounding environment by polluting the basic and essential components like water, air and soil. Even though the industrial revolution was a great success in terms of science and technology, society for multiple services, it also produced huge and enormous quantities of harmful pollutants, emitted into the environment that are very danger to human health. In developing countries, the air pollution is more serious due to overpopulation and urbanization along with the development of industrialization. 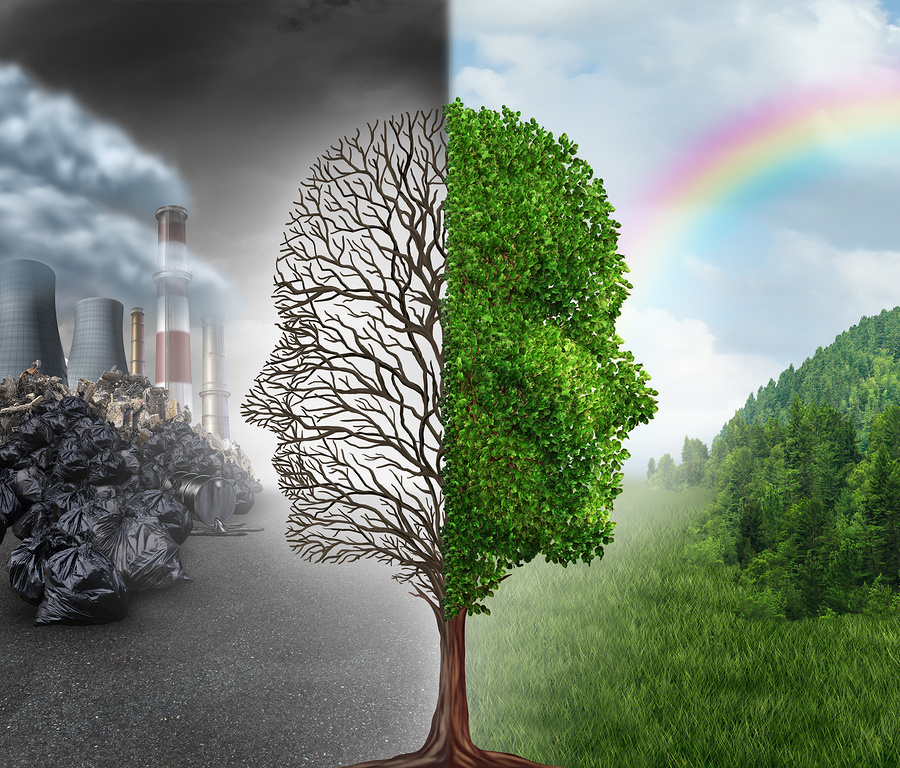 One of the greatest problems of this era is air pollution (Fig. 1). Since it is not only affects the environment but also possess hazardous effects on the human health. Number of pollutant present which effects the human health and resulting many diseases. It creates acid rain, depletion of ozone layer and contributes to global warming. And in all this role of particulate matter is significant because these are present in small sizes so, that’s why enter the blood stream and respiratory system and shown bad impacts on health. Air pollution mainly affects those living in urban areas where road emissions contribute the most to the degradation of air quality. There is also a danger of industrial accidents, where the spread of a toxic fog can be fatal to the populations of the surrounding areas. Extreme air pollution is recorded in India, where the air quality reaches hazardous levels. New Delhi is one of the more polluted cities in India. Flights in and out of New Delhi International Airport are often canceled due to the reduced visibility associated with air pollution. Pollution is occurring both in urban and rural areas in India due to the fast industrialization, urbanization and increase in use of motorcycle transportation. Air pollution threatens the sustainable health of human being and other living organisms in our earth. There are different pollutants that are responsible in disease in living beings. Among them, particulate matter (PM) which penetrate through inhalation and affect respiratory system.11, 12, 13, 14 Ozone in the stratosphere plays a protective and crucial role against ultraviolet irradiation but it is harmful at ground level in high concentration. Other pollutants such as nitrogen oxide, sulfur dioxide, volatile organic compounds and dioxins are all harmful to human health and environment. Carbon monoxide when breathed at higher level is a direct poisoning can bind with heamoglobin and reduce the oxygen level in tissues. Heavy metals such as lead is also direct poisoning when absorbed into the human body can affect the food chain. The best way to tackle this problem is possible through creating public awareness.

The physical, chemical and biological constituents of the environment are drastically affected by environmental pollution. From the survey of literature, it appears that the majority of air pollutants are emitted through human and natural sources. Natural causes that pollute the air which include forest fires, volcanic eruptions, wind erosion, radioactivity and evaporation of chemical compounds. Most of the climate pollutants are emitted from the human action like car, engine combustion, power stations and industrial machinery. These actions performed daily on large scale, it causes major role in air pollution. Some other actions including forest fire, soil erosion have greater influence on the human health.15, 16, 17, 18, 19, 20 Important major sources of air pollution are petrol stations, printing shop, dry cleaner, domestic actions, incineration of municipality wastes, industrial plants, metallurgical, fertilizer and chemical industry, refineries, power stations and petro-chemicals. The mobile sources are vehicles, airways, railways, cars and automobiles. While in natural sources includes physical disasters like soil erosion, forest fire, storms of dust and agricultural burning. Other classification which done based on pollutants and these are nitric oxide, carbon monoxide, carbon dioxide, hydrocarbons, sulfur dioxide, nitrogen dioxide. Air pollution also shown their effects on soil environment and water. Several radio-active components like uranium and radium accumulate in bones and causes cancer. These radio-active pollutants possess dangerous effects on the human health after entering body. Air pollution is a significant risk factor for multiple health conditions including respiratory infections, heart disease, and lung cancer.

Air pollution is one of the biggest problems related to health and environment, also in developing countries. In 2012 according to World Health Organization (WHO) more than 3 million deaths occur in the world due to ambient air pollution. The main problem related to air pollution is anthropogenic4, 5, 6, 7, 8, 9, 10 activities. It also influences bad effects on the human health, when person exposed to short time than it causes problems like chronic obstructive pulmonary illness, breath problem, asthma, respiratory illness, cough and hospitalization rate high. While in long duration exposure causes cardiovascular system problems, insufficiency of lungs and asthma. From the study it was concluded that if person exposed to air pollutant for long duration, the chances of diabetes is more.12, 13, 14, 15, 16 The global warming resulting from the emission of greenhouse gases especially CO2, has become a major concern in the recent years.  Almost all countries contribute to the rise of carbon emission. Increase in CO2 emissions will produce more heat. The Survival is becoming a very difficult because of the fossil fuel burning. It creates smog, acid rain, causes cancer, respiratory diseases, reduces the ozone layer and contributes to global warming.

The short term exposure to air pollution is associated with cough, shortness of breath, asthma, respiratory disease and chronic disease. The long term exposure of air pollution effects are chronic asthma, pulmonary and cardiovascular disease. It is well-known that our skin is acting like a protective shield against harmful ultraviolet radiation that comes from sunlight. However when pollutants penetrate via the skin damage our skin. Some of the air pollutants are carcinogenic and affect the liver and lung of our body organs. Exposure of our skin to PM and cigarette smoking may contribute to skin aging and skin cancer. Air pollution is damaging not only human health but also the environment around us in which we live. The most important environmental effects caused by air pollution are as follows:

Acid rain is acid precipitation containing harmful amounts of nitric and sulfuric acids. Sulfur and nitrogen oxides are involved in the formation of acid rain and are harmful to plants and marine organisms. They can make the water more acidic and damage trees and buildings. Ground level ozone is very harmful to human health and environment. Ozone penetrates the plants through stomata which blocks CO2 transfer and induces a reduction in photosynthesis. Global climate change is a major issue that resulted due to the “greenhouse effect”. The developmental activities have been producing large amounts of greenhouse gases in the atmosphere and mounting with harmful effects on our health, animals, forests, wildlife and agriculture. Animals suffering by health problems when exposed to high levels of air pollutants causing reproductive failure and birth effects. Eutrophication is occurring when excess concentrations of nutrients stimulate as surface run off that blooming of aquatic algae, which can cause reduction in population of fish production and deaths 18, 19, 20.

At present, it is not possible to eliminate the air pollution completely, but steps can be taken in a possible way to reduce it. The government has laid guidelines for air quality to restrict emissions and to control air pollution. As an individual, we may reduce air pollution problem by using public transport. Let us start buying energy efficient light bulbs and electronic appliances that will reduce the pollutants. Public awareness is one of the major significant methods to nullify this air pollution. We have right to breathe. Let all our activities moving towards attainment of sustainable development by controlling air pollution. Let us follow the rules and regulations, guidelines, laws and make this planet earth a very beautiful place to live. 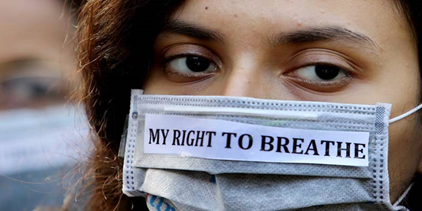 A Kankaria B Nongkynrih S Gupta Indoor air pollution in india: implications on health and its controlIndian J Comm Med2019392037