Savadi, Archana H B, Nalwarkar, and Rashmi B M: Study of serum electrolytes, calcium and magnesium in preeclampsia at a tertiary hospital in central Karnataka

Study of serum electrolytes, calcium and magnesium in preeclampsia at a tertiary hospital in central Karnataka

Background: Preeclampsia(PE) is a hypertensive disorder affecting about 5-14% of pregnancies worldwide and around 20% of high-risk pregnancies, resulting in maternal and perinatal morbidity and mortality. Imbalances in milieu of serum sodium and potassium, that are involved in functioning of vascular smooth muscles, leads to vasoconstriction and hypertension in PE. Calcium deficiency stimulates parathyroid hormone, leading to vasoconstriction. Magnesium regulates blood pressure by monitoring vascular tone and structure. There is scarcity of studies on these factors in PE in central Karnataka.

Aim: To estimate levels of serum calcium, magnesium, sodium and potassium in preeclampsia.

Settings and Design: Hospital based cross-sectional study conducted from September, 2020 to February, 2021 at a Tertiary Teaching Hospital in Chitradurga.

Materials and Mathods: 60 diagnosed cases of preeclampsia and equal number of age, parity and gestational age matched women with singleton normal pregnancies, attending antenatal clinic or admitted and treated in obstetrics wards of the hospital were included in the study. Clinical examination and laboratory investigations to estimate biochemical parameters were conducted.

Statistical Analysis: Data was analyzed in SPSS V:20. Statistical tests like chi-square and One-way ANOVA test were applied to find the significance of associations.

Conclusion: Timely estimation of serum electrolytes, calcium and magnesium through the course of pregnancy could help in early detection and prompt treatment of preeclampsia and also can prevent the adverse outcomes of pregnancies. Also, dietary restriction of sodium and dietary supplementation of calcium, magnesium and potassium rich foods to the pregnant women and calcium supplementation could reduce the risk of preeclampsia.

Preeclampsia is a common hypertensive disorder affecting about 5-14% of pregnancies worldwide and around 20% of high-risk pregnancies, resulting in maternal and perinatal morbidity and mortality.1 Preeclampsia(PE) is a triad of hypertension (blood pressure >140/90mmHg), oedema and proteinuria (≥300mg/24h or protein: creatinine ratio≥0.3) including any one of: thrombocytopenia, elevated liver transaminases, pulmonary oedema, new onset renal insufficiency or cerebral or visual disturbances, occurring after 20 weeks of pregnancy.2

All through pregnancy, the metabolic demand of foetus increases by 2-3folds and various biochemical, metabolic and haematological changes occur in pregnancy to support metabolism of both mother and growing foetus. Abnormal placentation in first trimester and maternal syndrome in second/third trimesters involving excess of antiangiogenic factors results in PE.3, 4, 5, 6, 7, 8, 9, 10, 11

Imbalances in milieu of serum sodium and potassium, that are involved in functioning of vascular smooth muscles, may lead to hyper-responsiveness of vasculature to vasoconstrictors like vasopressin, causing vasoconstriction and hypertension in PE.3, 4, 5, 6, 7, 8, 9, 11, 10 Calcium deficiency stimulates parathyroid hormone and renin release and caused vasoconstriction. It also indirectly affects smooth muscle function by increasing magnesium levels. Magnesium regulates blood pressure by monitoring vascular tone and structure. Additionally, alteration in angiogenic and inflammatory markers also lead to altered vascular contraction and immune maladaptation. Thus, oxidative stress along with electrolyte and micronutrient imbalances are implicated in etiopathogenesis of PE.3, 4, 7, 8, 9, 10, 11 As there is scarcity of studies on these above-mentioned factors in PE in central Karnataka, this study was undertaken at a tertiary level teaching hospital in Chitradurga, to estimate levels of serum calcium and magnesium, sodium and potassium in preeclampsia and to study the associations of these factors in preeclampsia compared to the normal singleton pregnancy group.

After obtaining institutional ethics committee clearance, this hospital based comparative cross-sectional study was conducted from September 2020 to February 2021, at a tertiary level teaching hospital in Chitradurga. 60 diagnosed cases of preeclampsia and equal number of age, parity and gestational age matched women with singleton normal pregnancies, attending antenatal clinic or admitted and treated in obstetrics wards of the hospital during the study period were selected by simple random sampling method, and included after explaining the purpose of the study and obtaining their informed consent.

Preeclampsia was defined as blood pressure >140/90mmHg after 20 weeks of pregnancy and either proteinuria ≥300mg/24h or protein:creatinine ratio ≥0.3 or one of the following: thrombocytopenia, elevated liver transaminases, pulmonary edema, new onset renal insufficiency, or cerebral or visual disturbances.2

Information was collected by interview technique, clinical examination and investigations, and documented in a pre-formed semi-structured questionnaire that included participant’s socio-demographic details, clinical history, natal history, anthropometric measurements of height and weight as per WHO guidelines.12 Blood pressure was recorded in supine posture after a rest period of 10 minutes with the standard mercury sphygmomanometer, by a single observer. Average of two readings was noted.12

Under aseptic precautions 5 ml of venous blood sample was collected from antecubital vein in plain vacutainer both from study groups. This blood sample was allowed to clot and serum was separated by centrifugation at 5000rpm for 5 minutes. The serum was used to estimate sodium, potassium, magnesium and calcium levels. Biochemical analysis was done in the central laboratory of the hospital by in VITROS 4600 - Dry Chemistry Analyzer. Serum calcium was analyzed by arsenazo III method. Serum magnesium was analysed by dye binding method. Serum sodium and potassium were analysed by direct ISE method.

Preeclampsia patients were further classified as mild and severe preeclampsia cases as per the 2013 diagnostic criteria for preeclampsia by the task force of American College of Obstetrics and Gynecologists.13

Data was compiled in MS Office Excel spreadsheet and analysed using SPSS V: 20(Statistical Package for Social Service). Qualitative data variables were expressed in frequency and percentages. Quantitative data variables expressed in mean and standard deviation. Pearson’s Chi-square test and one way ANOVA test were applied to find the significance of association between categorical and continuous variables of the 2 study groups respectively. Associations with p-value of <0.05 were considered be statistically significant.

The present study included 60 preeclamptic patients in preeclamptic group and 60 women with singleton normal pregnancies (comparative group). Among the preeclamptic patients, 75% were suffering from mild preeclampsia and 25% had severe preeclampsia. The average age of mild PE group was 22.5±3.4 years, average age of severe PE group was 21.9±2.2 and that of comparative group was 23.8±2.6 years. The study groups were comparable with respect to age, parity and gestational age (p>0.05). Pre-eclampsia was higher among primigravida (65% primigravida in mild PE and 73% primigravida in severe PE) when compared to multigravida women (35% in mild and 27% in severe PE). (Table 1)

Characteristics of the study participants 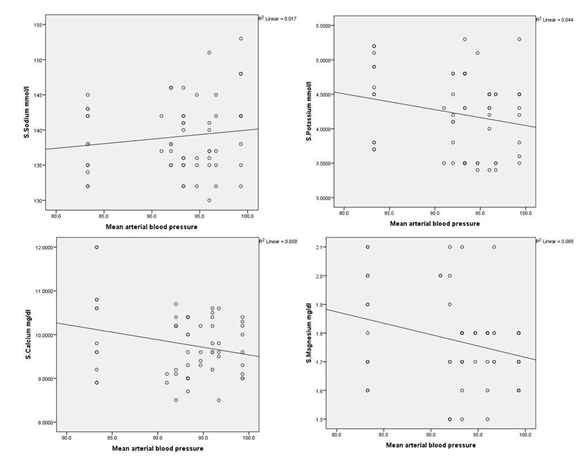 Table 2 shows the association of blood pressure and electrolyte levels among the 2 study groups. The average levels of systolic and diastolic blood pressure in both mild and severe preeclampsia group were significantly elevated compared to normal pregnancy group, with the highest average level of both SBP and DBP noted in the severe PE group SBP: 161±5.4mmHg and DBP: 114.5±4.7) (Table 2 )

Alterations in serum electrolytes levels indicate the underlying physiological and pathological changes of pregnancy. In our study, hypernatremia and hypokalemia were found in both mild and severe preeclampsia with highest derangement seen in the severe preeclamptic group (highest sodium levels: 147±3.4 mmol/l and lowest potassium levels: 3.5±0.4mmol/l). Similar results are found in the studies conducted elsewhere.6, 9, 11, 15 When pregnancy is complicated by pre-eclampsia there is an increased sensitivity of vasopressor substances like aldosterone and decreased production of cyclic GMP, endothelin and PGE2 and this may have implications in sodium retention and increased peripheral vascular resistance which further develop into hypertension. This increased sensitivity of aldosterone also affects potassium balance causing hypokalemia. Some studies of preeclampsia have shown abnormality in the transport of sodium and potassium pump across the vascular smooth muscle cell membrane, which is normally responsible for maintenance of blood pressure. 11, 14

In the present study, hypomagnesemia was found among both the mild and severe preeclamptic patients (mild PE: 1.5±0.5 mg/dl.; severe PE: 1.4±0.3mg/dL). Similar results are found in the studies conducted by Indumati V. et al and Sayyed AAK et al.11, 14 The success of magnesium therapy in the treatment for eclamptic seizures and its known effect on vascular responses in vitro suggest that magnesium is deficient in women with pre-eclampsia.16 The possible mechanism of hypomagnesemia and pregnancy induced hypertension could be promotion of vascular muscle relaxation by magnesium.

In our study levels of mean serum calcium were significantly lower among both mild (8.3±0.7mg/dl) and severe preeclamptic group (7.9 ±0.4mg/dl) compared to normal pregnancy group (9.7 ± 0.71 mg/dl). The findings of our study are similar to studies conducted elsewhere.5, 10, 11, 17 Any imbalances in the serum calcium milieu as noted by increased calcium excretion are found to be associated with abnormalities in BP levels. Disrupted calcium homeostasis can lead to altered vasoconstrictions. Hypocalcaemia stimulates parathyroid hormone and renin release, which in-turn increase the intracellular calcium in smooth muscle cells, resulting in high sensitivity of these cells to angiotensin II, further causing vasoconstriction and hypertension.5, 10, 11, 17 Further, there is an increase in demand for calcium with about 25grams of calcium required for foetal development, highlighting the importance of calcium in pregnancy.11, 18

In preeclampsia water and electrolyte imbalances occur, leading to sodium retention and potassium depletion, that lead to peripheral vascular resistance and hypertension. Also, hypomagnesemia, hypocalcaemia are found to be significantly associated with preeclampsia. Hence, dietary restriction of sodium and dietary supplementation of calcium, magnesium and potassium rich foods to the pregnant women in the form of milk, cheese, soybean products, leafy vegetables during the course of pregnancy, could result in a reduction in the incidence of pre-eclampsia. Calcium supplementation could reduce the risk of preeclampsia as well as risk of preterm births. As magnesium has an essential role in both foetal and maternal wellbeing, magnesium also has to be supplemented in pregnancies. Thus, timely estimation of serum electrolytes, calcium and magnesium through the course of pregnancy could help in early detection and prompt treatment of preeclampsia and also can prevent the adverse outcomes of pregnancies.