Energy is the major mover of sustainable and economic development. Energy is the key input to drive and improve the life cycle. Primarily it is the gift of the nature to the mankind in various forms. The consumption of energy is directly proportional to the progress of mankind. There is a very high demand for energy, which is currently satisfied mainly by coal, oil and petroleum which are from being a non – renewable and therefore non– permanent solution to the energy crisis. Thus, it is essential to tackle the energy crisis through efficient utilization of abundant renewable energy resources. Renewable energy sources have the potential to provide solutions to the long-standing energy problems being faced by human society. The renewable energy sources like wind energy, solar energy, biomass energy and tidal energy can be used to overcome energy shortage in India. To meet the energy requirement for such a fast growing economy, India will require more supply of energy than the total energy consumed today. The renewable energy is one of the options to meet this requirement. Today, renewable energy account for 33% of India’s primary energy consumptions. India is increasingly adopting responsible renewable energy techniques and taking positive steps towards ensuring a more sustainable future. This paper describes in brief the potentials of renewable energy options in India.

The energy which is derived from the resources that can be continuously regenerated and do not deplete over the time is known as renewable energy. It is a clean energy which would not damage the quality of life. Energy is a basic requirement for economic development and in every sector of Indian economy. It is thus necessary that India quickly look towards emerging renewable energy and technologies. Development in different sectors relies largely upon energy. With the growing population and raising quality of life, the world energy demands have increased. Developed countries like U.S.A. and Canada constitute about 5% of the world’s population but consume one fourth of global energy resources. The following Figure shows the strong correlation between per capita energy use and GNP. 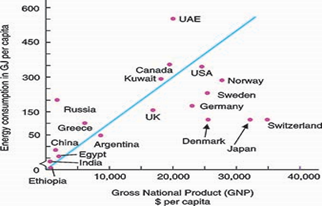 Promotion of energy conservation and increased use of renewable energy sources are the twin planks of a sustainable energy supply. Fortunately, India is blessed with a variety of renewable energy sources, 1, 2, 3, 4, 5, 6, 7, 8, 9, 10, 11, 12, 13, 14 like the solar, wind and hydropower. India is determined to becoming one of the world’s leading clean energy producers. The Government of India has already made several provisions, and established many agencies that will help it to achieve its goal. The renewable energy is the major steps of sustainable development has led to rapid adoption of the technologies by our country. Renewable energy sector has shown tremendous growth. India has the ninth largest economy. The energy demands are rising at 2.8% per annum, mainly due to steady economic growth of the country. India’s population of more than 1028 million is growing at an annual rate of 1.58%. The conventional energy resources may deplete in the near future. Therefore, in reality, renewable energy is energy from a source that is replaced rapidly by a natural process and is not subjected to depletion in a human time scale. As fossil fuel energy becomes scarcer, India will face energy shortages signiﬁcantly due to increase in energy prices and energy insecurity with in the next few decades. Increased use of fossil fuels also causes environmental problems both locally and globally. The sources of electricity production such as coal, oil and natural gas have contributed to one third of green house gas emission. It is essential to raise the standard of living by providing cleaner and more reliable electricity. According to International Energy Agency, around one lakh villages in India out of total six lakh are yet not electrified. Therefore renewable energy technologies are best suited to fill the gap. The major renewable energy sources of India are:

Coal and petroleum are the most widely used non-renewable energy resource for energy generation in present scenario. At present coal alone accounts for about 70% of India’s electricity supply but is not environment friendly. The uncontrolled emission of CO2 leads to global climate change which is the main culprit behind conventional non- renewable energy resource. The developing world community is struggling with scarcity of power. Most of the power is derived from non-renewable conventional energy resources which are decreasing day by day. Therefore to combat this problem, renewable energy resources must be utilized. With high economic growth rates and over 17% of the world’s population, India is a significant consumer of energy resources (4.04% of global energy consumption). India, at 1.2 billion people, is the second most populated country in the world. India ranks fifth in the world in total energy consumption. According to the International Energy Agency (IEA), coal/peat account for nearly 40 percent of India’s total energy consumption, followed by nearly 27 percent for combustible waste, natural gas 10 percent, hydroelectric power almost 25 percent, nuclear nearly 3 percent. There is a large potential for renewable energy in India, an estimated aggregate of over 150,000 MW. As against the estimated 84750 MW renewable energy based grid connected power generation potential in the country, so far only about 20500 MW installed capacity has been achieved. 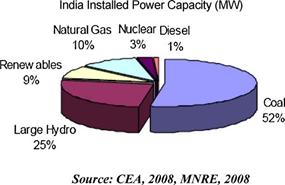 Sun is the prime source of all energy on earth. The solar power technology tries to harness a part of this vast resource by capturing solar radiations. Solar energy is radiant light and heat from the Sun that is harnessed using a range of technologies such as solar heating, photovoltaics, solar thermal energy, solar architecture, molten salt power plants and artificial photosynthesis. Prime solar energy technologies in India are concentrating photovoltaics and thermal collectors. 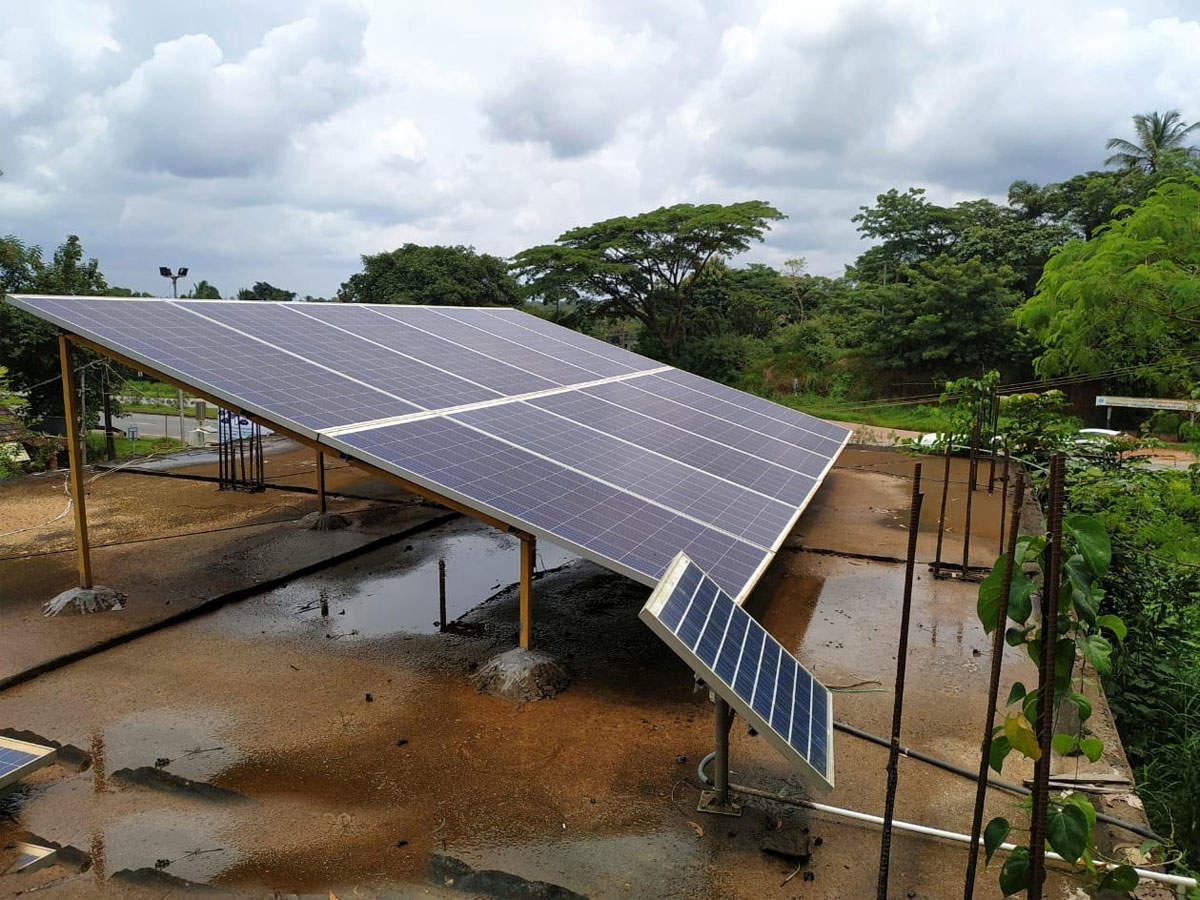 The origin of wind energy is sun. When the sun rays fall on the earth, its surface gets heated up and as a consequence winds are formed. Kinetic energy in the wind can be used to run wind turbines but the output power depends upon the wind speed. Turbines generally require a wind in the range between 5.5 and 25 m/s.

India’s flagship programme for commercial application of wind energy in the 1990s opened new avenues for sustainable and clean energy option. Wind energy describes the process by which wind is used to generate electricity. Wind energy accounts for almost two-thirds of the installed renewable energy capacity of the country and up to 6.9% of the total power production. 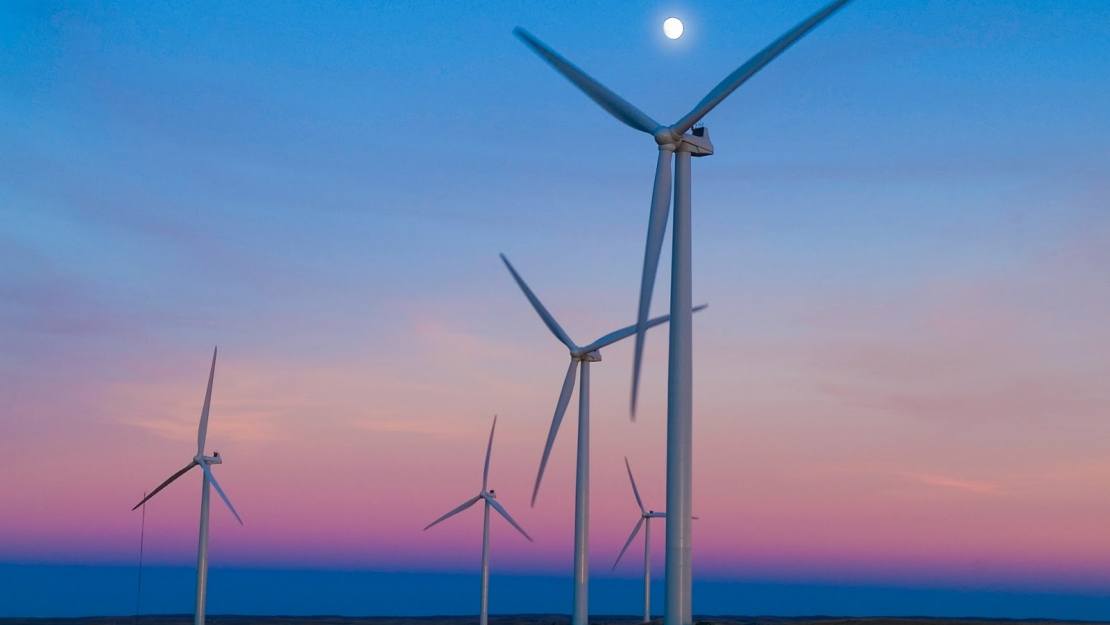 In the contineous search of clean, safe and renewable energy sources, tidal energy has emerged as one of the attractive solutions, non- polluting the environment friendly source of energy. It is perhaps the oldest renewable energy technique to the mankind for mechanical energy conversion as well as electricity generation. According to MNRE as on March 2018, out of total power generation installed capacity of 187,087 MW in the country, the large hydropower contributes 25% i.e. 65170 MW. Ministry of New and Renewable Energy (MNRE) has created a database of potential sites. In India, hydropower projects with a station capacity of up to 25 MW each fall under the category of small hydropower (SHP). India has an estimated SHP potential of about 16000 MW, of which about 18.5% has been tapped so far i.e. 2960 MW.

Tidal energy is power produced by the surge of ocean water during the rise and fall of tides. Tidal energy is a renewable source of energy. Oceans hold twofold renewable energy, thermal energy due to surface heating by the sun and mechanical energy emanating from tides and waves. 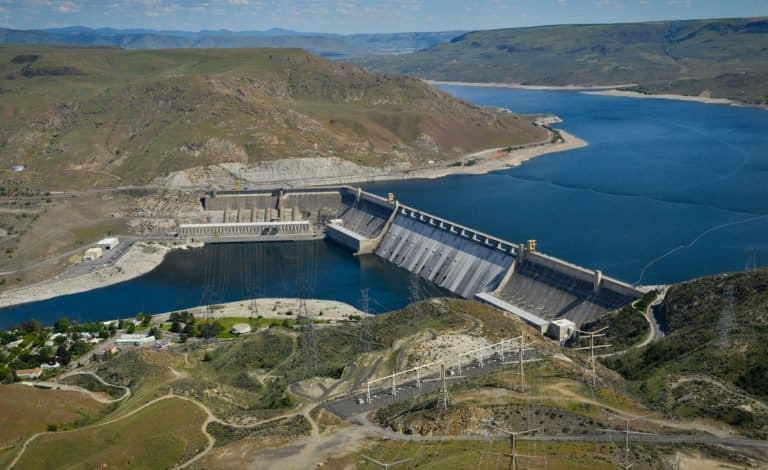 At the time of sufficient difference in height of water (at least 16 feet) on either side of barrage, the gates are opened and the “hydrostatic head” thus obtained causes water to flow through turbines producing electricity by power generator. 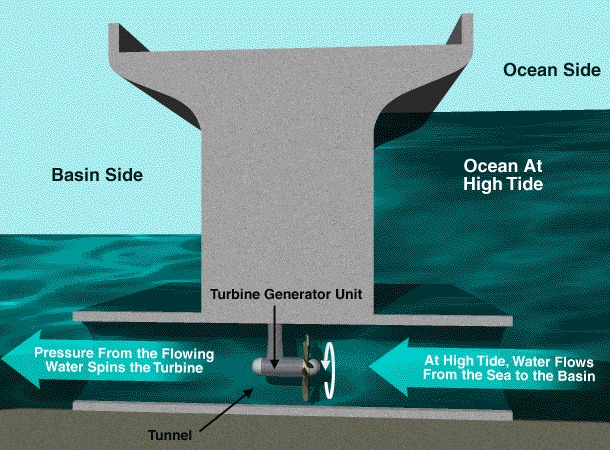 Biomass has been defined as all land and water based vegetation as well as organic wastes, fulfilled almost all of human kind’s energy need prior to the industrial revolution. In present day scenario, once again its utilization for generation of energy has gained momentum because of limited availability of the conventional energy resources as well as environmental concern due to Greenhouse gas emissions. India has biomass production of 546 million tonnes per year from the agricultural sources alone to generate electricity at a capacity of 17,986 MW. According to MNRE as on March 2016, India is very rich in biomass energy and has a potential of 16,840 MW.

There is an urgent need for transition from petroleum based energy systems to renewable resources to mitigate climate change. Energy security, economic growth and environment protection are the national energy policy of any country of the world. The need to boost the efforts for further development and promotion of renewable energy sources has been felt in India over in light of high prices of crude oil. A critical part of the solution will lie in promoting renewable energy technologies as a way to address concerns about energy security, economic growth in the face of rising energy prices, health costs and environmental degradation. Finally, renewable energy provides enormous beneﬁts and can contribute signiﬁcantly in the national energy mix for economic, environmental and social costs and it is expected that the share of renewable energy in the total generation capacity will increase in future for the attainment of sustainable development.