Background: In India, many lives that could easily be saved are lost due to a paucity of donated organs. This trend could easily be reversed by educating the general public. Religious beliefs and religious leaders play an important role in the society. With a concept to educate the religious leaders, to strengthen the message of increased organ donation, a study was conceptualized to test the efficacy of such an intervention.

Aims: To study religious beliefs and organ donation among the heterogenous population of Maval Taluka.

Materials and Methods: An educational interventional study was carried out on four basic major religious groups namely Hindu, Muslim, Sikh and Christian. Data was collected from 328 participants by visiting respective religious places. A ten-item self-structured validated questionnaire was designed to assess the knowledge and beliefs regarding organ donation. Pre-test was carried out to assess the basic knowledge on organ donation. Educational intervention regarding the benefits of organ-donation was done, followed by a post-test.

Statistical Analysis: The data was statistically analysed by ANOVA in SPSS software.

Results: The overall awareness on organ donation was increased by 22% after the planned educational intervention.

Conclusion: These results of the study showed a high degree of acceptance amongst all the groups & willingness for organ donation. Hence, such awareness programmes should be conducted at regular intervals on a large scale so that the problem of shortage of donated organs can be minimized.

Organ donation in our country has the potential to save thousands of lives of people presently living with diseased or dysfunctional organs.1, 2 In general, different religious beliefs support the concept of organ donation, but still the frequency of donation remains low. This problem could be overcome by educating the general population as well as religious leaders3. Educational interventions will help to instill the right knowledge in the society. With this idea in mind, an educational interventional study was planned to promote organ donation amongst four basic major religious groups namely Hindu, Muslim, Sikh and Christian in Western Maharashtra.

Thus, the purpose of this study was to assess the knowledge, attitude and belief towards organ donation and to assess the impact of an educational intervention on a heterogenous population of different religions.

Prior permission, from the religious head of each of these institutions, was taken to address groups of minimum 50 people at a time. A ten-item semi-structured validated questionnaire was designed to assess the knowledge, attitude and beliefs regarding organ donation. The questionnaire was translated into local languages Hindi, Marathi and English. All sets of questionnaires were field tested for both face value and content validation was done. All the participants were asked to answer a pre-structured questionnaire (pre-test) to evaluate their background knowledge regarding organ donation. This was followed by an educational intervention, with interactive question and answer sessions being held on organ donation. The respective religious leaders were encouraged to attend the training sessions. This had a dual effect – not only were the religious heads getting the right information about organ donation; but their presence strengthened the belief that the information being shared by the trainer was in accordance with the religious teachings as well. The location of the training was specially chosen as the respective religious place of worship itself, because it again strengthens the ideals that organ donation is a desirable and altruistic action across all religions. The intervention incorporated a MS PowerpointTM presentation that include material that highlighted the statistics of organs donation, types of organs donation, legal issues and beliefs about the religion, motivational messages, facts and figures, to bring about necessary modification in the perceptions and intentions of the participants regarding organ donation. Immediately after the session, the same was administered as a post-test to the same participants. This helped us to analyse the percentage change in the study population following the educational intervention.

The difference between pre-test and post-test scores was analyzed by ANOVA in SPSS software (version 17).

Our study revealed an interesting set of findings. There was a significant increase in the knowledge from 58% to 80% in pre-test to post-test (Table 1 , Figure 2). This meant that after the education intervention overall awareness was improved by 22% in these groups irrespective of their age, educational background and residential area.

From the participant’s religious point of view, in pre-test 69%, 6%, 57%, 70% respectively in Hindu, Muslim, Sikh and Christian mention that organ donation were not against their belief. However post educational intervention this percentage was increased to about 90%, 20%, 75% and 90% in the Hindu, Muslim, Sikh and Christian religions respectively. In the pre-test overall 51% participants felt that organ donation was permissible in their religion, while this was improved to 69% in the post-test. Highest awareness was observed in Hindu and Christian religion, while lowest was seen in the Muslim community (Table 1, Table 2). 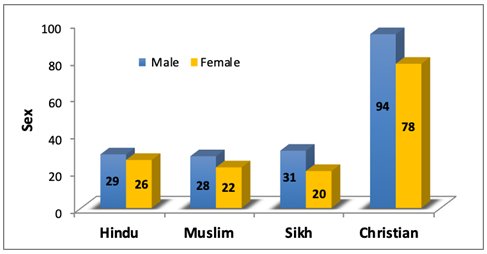 Awareness about organ donation & religious belief (Response to Question No. 6) 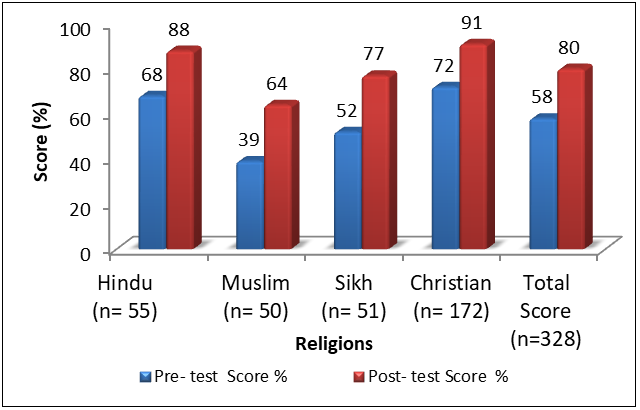 Organ donation is the process of giving an organ or a part of an organ for the purpose of its transplantation into another person.3 No country in the world, till date, collects sufficient organs to meet the needs of their citizens.4, 5 There is an urgent and vital need to increase the availability of human organs.6 In the present study, majority of participants had adequate knowledge about that organ donation. Many participants knew that organs can be donated immediately after death, but there was limited knowledge on living organ donation. However, after educational intervention many participants were aware and expressed a desire to donate their organs.

Previous studies have shown that educational intervention could increase knowledge and positively influence the intentions of participants to donate their organs.1, 6 The views held by inﬂuential religious leaders were important, because these individuals often guide social attitudes and behaviour.7

Furthermore religious, cultural or socio-economic beliefs have been cited as barriers in previous literature.8, 9

Nearly, all religions support altruism in organ donation as it serves a social and humanistic cause.10, 7 Those study participants who were described as being more religious may be less likely to support organ donation, believing that their religion oppose organ donation. ‘Daan’ of organs is common practice in Hinduism.11 Both Christianity and Sikh community favours organ donation.12, 11 In our study high awareness was observed among Hindus and Christians both in the pre and post-test results. Lowest awareness was observed among Muslim religion following the intervention. The Qur’an accepts organ donation, provided that success of the transplantation procedure must be highly probable; the donor or the family should have consented to it and if possible organ donation must be between Muslims only.13, 10 The perceived reason for the lowest knowledge among Muslims may be, that they may seek the advice of their local imam and ultimately, the advice of this scholar is respected.11 It may be beneficial to specifically aim for better education for the Imam and other religious leaders who can help to change the age old mind-set and remove the perceived barriers to organ donation among the Muslims.14

An encouraging finding was that, many participants were willing to donate their organs immediately after death; this findings corroborate with Raghuram and Shroff.17 When asked, would their family support organ donation from an ethical point of view; most of the participants responded yes, since most of the families attended the lecture together. After completion of study, many participants willingly called us to register themselves as organ donors. Hence, educational interventions can be of great benefit and should be encouraged.

Conducting such lectures frequently and at multiple gatherings would be a very feasible method which educates the public about organ donation drives. Our study highlighted the view that if health professionals tactfully approach the religious leaders and utilize their goodwill and positive support it will result in creating higher awareness and an increased willingness for organ donation. For successful donation, adequate knowledge and clear discussions between treating physicians and patient relatives at the time of death is important and also needs to be encouraged and highlighted among the medical fraternity as well.

The number of patients waiting for organ transplant is rapidly increasing worldwide. Therefore, the existing gap between the demand for available organs and the supply is becoming wider every year. An improvement of perception and knowledge will be useful for the improvement of organ donation followed by transplantation.18 Indeed, it was clearly demonstrated the beneficial effects of such interventions aimed at improving the perception and attitudes toward organ donation. According to Tontus, when considering the number of patients who died while waiting for transplantation, organ donation awareness projects that are focused on converting knowledge to behavior are believed to be very critical. It is important to provide organ donation-oriented training at every educational level.19

Our present study suggests greater religious acceptance amongst all religious groups following the educational intervention and utilization of the religious leaders to boost the knowledge being shared, which may highlight the pivotal role of information dissemination with a religious backdrop that could not only increase their knowledge, but also change attitude and break down perceived religious barriers. The ultimate benefit would be a substantial increase in the number of organ donations and subsequently more number of lives could be saved.

The authors declare that they have no conflicts of interest

Institutional Ethics Committee approval was taken prior to the study.

Manuscript was presented in the Conference

We would like to acknowledge the management of our Institute for promoting active research. We are also grateful to all those participants who were part of this study and the religious leaders who supported us in conducting this study. We are especially thankful to Mr. Amol More, a teacher of Gurukul School, Lonavala for his help to visit the different religious places in Maval Taluka.

UY Ramadurg Impact of an Educational Intervention on Increasing the Knowledge and Changing the Attitude and Beliefs towards Organ Donation among Medical StudentsJ Clin Diagnostic Res2014855710.7860/jcdr/2014/6594.4347