Internal jugular vein thrombosis (IJVT) is uncommon and an unidentifiable vascular disease which showed fatal complications mainly sepsis and pulmonary embolism. It is usually subsidiary to intravenous drug abuse, prolonged central venous catheterization or deep head-neck infections or trauma. Associated malignancies are not common and not well documented in the etiology of IJVT. Spontaneous IJVT is considered when no evident predisposing cause of thrombosis is present. A previously healthy, 37-year-old woman doctor by profession presented to the radiology department due to the mild painful swelling in the left anterior side of her neck. Physical examination revealed a painful, soft and immobile mass in the left anterior side of the neck beneath the sternocleidomastoid muscle, without hyperemia or local heat. On ultrasonographic examination, an echogenic thrombus with absent colour flow noted in left internal jugular vein s/o complete thrombosis. The patient was administered subcutaneous Fondared 7.5 mg (fondaparinux sodium inj) as anticoagulant therapy for 14 days (2 weeks). Her complaints were relieved within 14 days and later she was put on Ecosprin 150 mg once daily for 6 months. Partial recanulization was seen after 3 months. This case report describes a patient with IJVT. Venous thrombosis in general results from impaired blood flow locally or systemically that leads to activation of coagulation. Physicians should uphold a high index of suspicion in patients who present with undiagnosed swelling in the neck, or other signs and symptoms attributed to IJVT.

A previously healthy, 37-year-old woman doctor by profession presented to the radiology department because of pain swelling in the left anterior side of her neck. She reported that her husband had first noticed it 2 days before presentation. She had no previous history of trauma, malignant disease, infection, operation or IV catheterization, and had never consumed tobacco or alcohol. Physical examination revealed a pain, soft and immobile mass in the left anterior side of her neck, beneath the sternocleidomastoid muscle. The mass was not associated with hyperemia or local heat (Figure 1). Oropharyngeal examination was unremarkable. Patient showed no palpable cervical, axillary and inguinal lymph nodes. Examination of other systems were also normal. Ultrasonography revealed a echogenic thrombus with absent colour flow noted in left internal jugular vein s/o complete thrombosis (Figure 2). The patient was diagnosed with IJVT. Computed tomography (CT) 3D CT scan neck venogram findings complete occlusion of left jugular vein seen extending from the brachio-cephalic vein along its entire cervical course (Figure 3). Small cervical extracranial portion of jugular vein cranially and along the jugular canal appears normal suggestive of Thrombus. Hypoplastic left vertebral artery. Visualized portion of common carotid arteries, right vertebral artery appears normal.

The patient was administered subcutaneous Fondared 7.5 mg (fondaparinux sodium inj) as anticoagulant therapy for 14 days (2 weeks). Her complaints were relieved within 14 days and later she was put on Ecosprin 150 mg once daily for 6 months. Partial Recanalization was seen after 3 months Figure 4. She was completely well at a follow-up visit after 6 months.

Soft and immobile mass in the left anterior side of her neck, beneath the sternocleidomastoid muscle 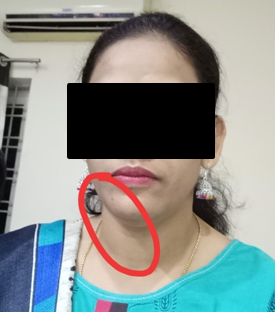 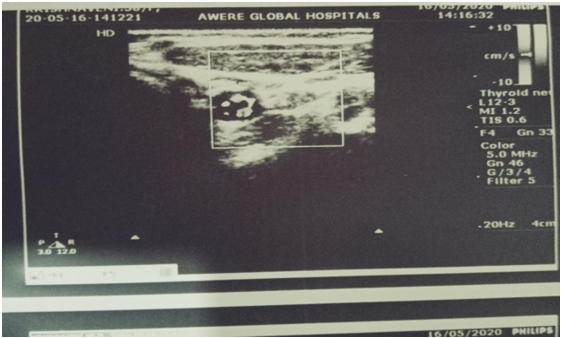 SIJVT states spontaneous internal jugular vein thrombosis is advised when no apparent predisposing cause of thrombosis are present within the vessel. The present report observed that patient who was doctor by profession visited to the radiology department with pain swelling in the neck, which was diagnosed sonographically as IJVT. Although almost all possible precipitating conditions were investigated and ruled out, there was no proven reason for IJVT. Hence, SIJVT was considered. The findings are discussed and compared with the previously published data. The diagnosis of SIJVT often is very challenging and requires high degree of clinical suspicion.

Previous literature reported that clinical presentation of IJVT is often subtle and easy to miss. Some patients do not complain of pain or swelling in the neck, and the vein is not even palpable in many patients.2 Fever, leukocytosis, cervical pain and neck swelling are the most common manifestations in nearly 80% of patients who had suffering from IJVT.2 Less than half of the patients showed cord sign, sepsis syndrome and pleuropulmonary complications and superior vena cava syndrome can be seen in around 10% of patients. Patient in the present case report was admitted because of swelling in the right anterior side of the neck, which was noticed by accidental. The observed mass was noted painless and did not limit the range of neck motion. Patient showed that no cellulitis, tenderness or any inflammation associated with the mass. She was afebrile with no leukocytosis. Venous thrombosis generally results from impaired local or systemic blood flow that leads to activation of coagulation. Virchow the scientist was the first person to describe the so-called classic triad that predisposes to intravascular thrombosis. The constellation includes, but is not limited to blood vessel injury, blood flow stasis, and a hypercoagulable state.2 The present patient had no history of trauma and no clear hypercoagulable state secondary to deficiency of factor V Leiden, protein C, protein S, or antithrombin III. The patient also had not reported any radiotherapy. Case showed that there was unidentifiable precipitating factor in her medical history, on physical examination or laboratory investigations to lead to IJVT. Lemierre syndrome (LS) is a well-known and rarely identified, cause of IJVT. LS was mainly characterized by IJVT after oropharyngeal infection, and septic thrombosis related with bacteremia.1 But it has fallen significantly due to the liberal use of antibiotics, it still appears especially in patients with low socioeconomic status.2 The present patient consistes of no sign of infection on examination or in her medical history except showed only positive sign was a palpable swelling in the anterior neck. LS can be associated with serious complications of sepsis and pulmonary embolism.3 LS can be ruled out, as the patient has been healthy in the 6 months after illness. Literature showed that malignant neoplasms can also be the underlying factor for IJVT. Mainly these can be diagnosed or identified by elaborate investigations. The patient in the present case report was evaluated thoroughly for features that were indicative of cancer, without any positive finding. Diagnosis of IJVT can be established with ultrasonography, contrast-enhanced computer tomography and magnetic resonance imaging (MRI). But ultrasonography (USG) is the first imaging modality of choice for primary care and emergency physicians.1, 2 Ultrasonographic findings revealed that of IJVT include a dilated and incompressible vein, together with intraluminal clotting in late presentation.2 Doppler scan can be helpful for detecting flow changes secondary to thrombus during the acute phase of clot formation. Clinicians some times advocate CT scan in addition with IV contrast as the investigation of choice for suspected IJVT. CT images can also help differentiate the thrombus from deep neck abscesses and/or lymph nodes with central necrosis.2 The outcome is generally favorable with similar morbidity and mortality to subclavian and axillary vein thrombosis. If systemic anticoagulation is administered, pulmonary embolism is seen in < 1% of the patients with isolated IJVT. These patients usually have concomitant multisystem diseases. Hence, the contribution to mortality by the thrombus itself is difficult to determine.

SIJVT is rare and has potentially fatal complications. Physicians should uphold a high index of suspicion in patients who present with undiagnosed swelling in the neck, or other signs and symptoms attributed to IJVT.