Study of TSH and prolactin in PCOS subjects: A case control study

Background: To assess serum TSH and Prolactin in women with PCOS in comparison with healthy women as controls and to find correlation between TSH & Prolactin in PCOS subjects.

Materials and Methods: A comparative study including 30 women diagnosed as PCOS and 30 age and BMI matched healthy women as controls was conducted. The age group for the study was 18-35 years. Fasting blood samples were drawn to measure serum thyroid stimulating hormone(TSH) and prolactin.

Conclusion: We could not find any significant correlation between serum TSH and serum prolactin. Further, studies with larger number of PCOS subjects will be beneficial. However monitoring of Prolactin & TSH in PCOS should be done.

Polycystic ovary syndrome (PCOS) is the most common endocrine disorder affecting women of reproductive age group and is the leading cause of female infertility.1 The rate of prevalence of PCOS varies between 5 to 10%.2 According to ESHRE/ASRM consensus workshop at Rotterdam in 2003, the diagnosis of PCOS is based on the presence of any two of (1) chronic anovulation, (2) clinical/ biochemical parameters for hyperandrogenism, and (3) polycystic ovaries on ultrasonography.3

The exact pathogenic mechanism of PCOS is unknown. There are many hypothesis concerning the causes of PCOS development and the concurrent existence of many interdependent disorders.4 Among the hormonal disorders of female reproductive system number of problems result from aberrant dysfunction of hypothalamic-pituitary-ovarian axis. These relatively often lead to infertility.

Thyroid dysfunction is known to interfere with several aspects of reproduction and pregnancy. Hypothyroidism or hyperthyroidism in females along with subclinical thyroid dysfunction have been found to be associated with anovulatory cycles, decreased fecundity and increased morbidity during pregnancy.5, 6, 7

Pituitary hormones such as TSH, prolactin or growth hormone may act synergistically with follicle stimulating hormone (FSH) and lutenizing hormone (LH) to enhance the entry of non growing follicles into growth phase.8

Several studies have suggested hyperprolactinemia & thyroid dysfunction in PCOS. Measurement of prolactin and thyroid hormones, especially thyroid stimulating hormone (TSH), has been considered an important component of infertility work up in women, especially those presenting with menstrual irregularities.

The study was carried out on 30 PCOS subjects in the age group of 18 to 35 years and 30 voluntary age and BMI matched healthy women with normal menstrual cycle as controls. The study was conducted at Kempegowda Institute of Medical Sciences & Hospital. The diagnosis of PCOS was fulfilled as per Rotterdam criteria. Presence of at least two criteria from clinical, hormonal and abdominal USG category was considered diagnostic of PCOS. Patients with diabetes mellitus, hypertension, dyslipidemia, renal and liver failure, thyroid disorders and other endocrine disorders and patients receiving hormonal/non-hormonal treatment for PCOS were excluded from the study. The institutional ethical committee approved the study protocol.

Informed consent was obtained from all the participants

A pre-structured and pre-tested proforma was used to collect the data. Baseline data including age, BMI, detailed medical history, clinical examinations and relevant investigations were included as part of the methodology. Serum TSH and prolactin were measured in all participants from blood samples collected after 12 hours of fasting. Serum TSH and prolactin were measured by electrochemiluminescence immunoassay (Elecsys 2010 analyzer, Roche Diagnostics).

Results on continuous measurements are presented as Mean ± SD. The basic characteristics and the mean distributions of biochemical parameters are depicted in Table 1 of the cases and controls. There was no significant difference in age between two groups. Slightly higher mean was recorded in TSH and prolactin in cases than in controls but the difference in mean between the two groups was not statistically significant (P>0.05). Correlation of TSH with prolactin is depicted in Table 2. No significant correlation could be found between TSH and prolactin in cases (r= 0.270, p = 0.149) or controls (r = - 0.110, p = 0.564) which is shown in Figure 1, Figure 2. 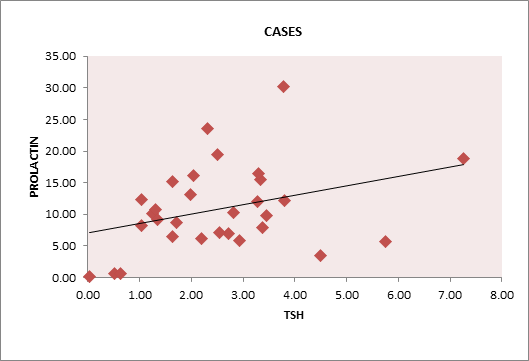 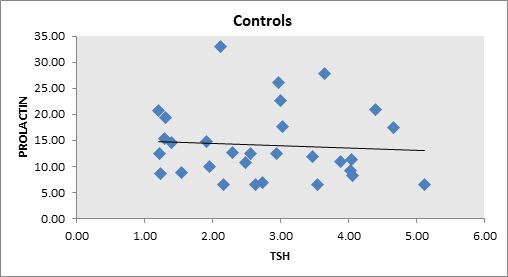 The consequences of the polycystic ovary syndrome extend beyond the reproductive axis; women with the disorder are at substantial risk for the development of metabolic, endocrine and cardiovascular abnormalities.11

In our study higher TSH mean was recorded in cases compared to controls. This was consistent with study done by D.I Conway et al.12 and Janssen et al.13 who documented a high mean level of TSH in PCOS patients.

Studies showing mild hyperprolactinemia has been reported in 5% to 30% of patients with PCOS. In present study, higher mean prolactin was recorded in PCOS women compared to controls but statistically insignificant (P≥0.05). This finding was consistent with Ansam, Sodabeh et al. and Sunita et al.3, 14, 15 This increased prolactin may augment adrenal androgen secretion by the inhibition of 3beta-hydroxysteroid dehydrogenase activity or, less often, through selective action on the sulfation of DHEA in adrenal or extra-adrenal sites. However, prolactin inhibits FSH-induced ovarian aromatase, leading to intraovarian hyperandrogenemia.16 On the other hand, there is no evidence of a pathophysiological connection between PCOS and hyperprolactinemia which signifies that the presentation of the latter in an individual with PCOS ought to be due to other pathology and should encourage etiological investigations.11 Contradictory to this study done by Sunitha Tirumala Shetty et al concluded that there is significant influence of hypothyroidism over serum prolactin levels which contributes to decrease in gonadotropins leading to primary infertility.3

Though hyperprolactinemia & thyroid dysfunction is found in other studies, in our study serum TSH and PRL level were within normal range. Further studies with larger number of PCOS subjects will be beneficial. Since higher TSH and PRL means were found in cases, it can be used has screening test in PCOS subjects.

Self-funding was done for the study.

© This is an open access article distributed under the terms of the Creative Commons Attribution License - Attribution 4.0 International (CC BY 4.0). which permits unrestricted use, distribution, and reproduction in any medium, provided the original author and source are credited.