Background: Diabetes mellitus is an endocrine metabolic disorder that causes significant morbidity and mortality around the world. Thyroid gland dysfunction is a significant problem in diabetic patients. In diabetics, hypothyroidism is the most common thyroid abnormality. When compared to healthy people, diabetic patients have a higher incidence of thyroid abnormalities. Diabetes mellitus treatment can be complicated due to irregular thyroid activity.

Materials and Methods: A total of 120 people were studied, with 60 patients with type 2 diabetes mellitus (Cases group) and 60 healthy people (Control group). Patients with and without strong diabetic control are represented in 60 cases. Both subjects had their fasting venous blood samples taken. In both the cases and control groups, fasting blood sugar, HbA1c, serum T3 (Triiodothyronine), serum T4 (Thyroxine), and serum TSH (Thyroid-stimulating hormone) were measured.

Conclusion: Thyroid hormone levels in type 2 diabetics are abnormal due to a change in the hypothalamic–pituitary–thyroid axis. This in turn produces significant metabolic disturbances. This is more significant in diabetics with poor glycemic control. Routine screening for thyroid function should be done in diabetics, which helps in preventing complications. This contributes to improved treatment by lowering morbidity and improving quality of life.

Diabetes mellitus (DM), a leading cause of death around the world, is one of the most difficult health issues of the twenty-first century.1, 2, 3 It's a category of metabolic diseases marked by chronic hyperglycemia caused by problems with insulin secretion, insulin action, or both. Diabetes is caused by a variety of pathogenic mechanisms, ranging from autoimmune destruction of pancreatic cells, resulting in insulin deficiency, to defects that result in insulin resistance.4, 5 The overwhelming majority of diabetic cases can be divided into two groups based on their etiopathogenetic causes. One type of diabetes is Type 1, which is caused by a complete lack of insulin secretion. Type 2 diabetes is a more common form of diabetes mellitus that is caused by a combination of insulin action and secretion problems.4, 5 Diabetes prevalence was projected to be 2.8 percent in 2000 and 4.4 percent in 2030 by the World Health Organization (WHO). The global diabetes population is projected to grow from 171 million in 2000 to 366 million by 2030.[6.7] Sedentary behavior, dietary changes, race, hypertension, and obesity are all thought to play a role in this epidemic. The two most common endocrinopathies seen in clinical practice are thyroid disease and diabetes mellitus. Diabetes and thyroid disorders have been shown to have reciprocal effects, and a connection between the two has been discovered in the literature.6, 7 In 1979, a study was published that showed a connection between diabetes and thyroid dysfunction.8 Since then, a variety of studies have reported that between 2.2 and 17 percent of diabetic patients have thyroid dysfunctions.9, 10 However, fewer studies have found a much higher incidence of thyroid dysfunction in diabetics, at 31 percent and 46.5 percent, respectively.11, 12 Thyroid disorders are more common in diabetic patients than in the general population.13

Since insulin and thyroid hormones are so intertwined in cellular metabolism, having too much or too little of one causes the other to malfunction. Insulin's physiological and biochemical interactions, as well as the effects of insulin and iodothyronines on carbohydrate, protein, and lipid metabolism, have been studied. According to these documents, iodothyronines are insulin antagonists, with high levels being diabetogenic and the absence of the hormone inhibiting the development of diabetes.17

Thyroid dysfunction can make diabetes more difficult to manage. Hyperthyroidism raises the rate of gastrointestinal glucose absorption, as well as insulin resistance and insulin degradation, and is linked to worsening glycemic control in diabetics, whereas hypothyroidism increases hypoglycemia vulnerability, complicating diabetes management.18 Thyroid hormone disorders are often linked to diabetes, and thyroid dysfunction that goes undiagnosed may harm diabetes and its complications.7 This study aimed to assess the thyroid profile in type 2 diabetic patients.

The total numbers of subjects studied were 120, comprising 60 patients of type 2 diabetic mellitus (Cases group) and 60 normal healthy individuals (Control group). 60 cases include patients with and without good glycemic control. Both cases and controls gave their informed consent.

The results obtained and expressed in mean ± SD. Student t-test was used to compare the two classes, and SPSS statistical package version 15.0 was used to evaluate each parameter statistically. A p-value of 0.05 was considered statistically important.

The participants in this study ranged in age from 45 to 60 years old. The mean age of diabetics was 50.96 ± 4.86 years and the mean age of controls was 51.24 ± 5.14 years. This case-control research included 60 type 2 diabetic patients of both genders who were on medication and had no reported symptoms or prior thyroid disease.

Sex and age wise distribution of cases and controls

Test parameters in cases and controls 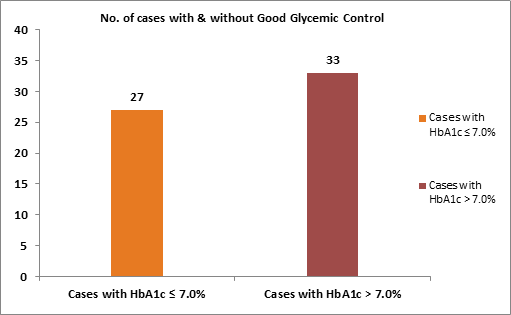 Diabetes, an endocrine metabolic disorder with a wide range of symptoms, is a leading cause of morbidity and mortality around the world. It has a global distribution and is becoming more common every day, posing a serious threat to public health around the world.19 India will continue to have the highest number of diabetic subjects as a result of rapid urbanization and economic growth.20 Diabetes is commonly associated with altered thyroid function. After diabetes, thyroid disorders are the most prevalent endocrine disorders in the general population. As a result, it is normal for a person to suffer from both thyroid disease and diabetes.1 The study aims to look at the levels of serum T3, T4, and TSH, as well as fasting blood sugar in type 2 diabetics. The present study includes 120 subjects of which 60 were known type 2 diabetic patients (cases) and 60 were normal healthy controls. When compared to controls, diabetics had significantly lower serum T3, T4 levels, while diabetics had significantly higher serum TSH levels. This is by the studies of Vikram BV et al.,21 Gurjeet S et al., 1 and Shekhar CY et al.15

In diabetes, there are alterations in the hypothalamic–pituitary–thyroid axis. The hypothalamic and plasma TRH, pituitary and plasma TSH, and TSH secretion rate are among the most significant changes. Despite normal peripheral TSH metabolism, the response of TSH to TRH is also decreased. Thyroid gland output of T3 and T4, as well as iodide uptake, are reduced. Both the thyroid and pituitary glands undergo significant structural changes, which are followed by significant changes in their secretory activities. Furthermore, the deiodination of T4 to T3 is reduced.25 Thyroid hormone-binding inhibitor (THBI), an inhibitor of the extrathyroidal conversion enzyme (5'-deiodinase) of T4 to T3, and hypothalamic–pituitary–thyroid axis dysfunction were attributed by Suzuki et al to abnormal thyroid hormone levels observed in diabetes. These conditions can arise in diabetics, and they will be exacerbated in diabetics who are poorly regulated. In these diabetics, stress, which is linked to diabetes, can trigger changes in the hypothalamus-anterior pituitary axis.27

© This is an open access article distributed under the terms of the Creative Commons Attribution License - Attribution 4.0 International (CC BY 4.0). which permits unrestricted use, distribution, and reproduction in any medium, provided the original author and source are credited.