Background: Diabetes mellitus & thyroid dysfunction are the most common endocrinological disorders in the current era. Diabetes mellitus is a group of metabolic disorders usually associated with dyslipidemia which increases risk of cardiovascular disorders and resultant morbidity & mortality. Thyroid dysfunction particularly hypothyroidism is frequently encountered in diabetic patients. T2DM results in reduction in thyroid releasing hormone (TRH) synthesis & limits T3 & T4 production, which results in increased total cholesterol & LDL in circulation. By studying the association of thyroid hormones & lipid profile in diabetes patients, we can enhance the knowledge about the interrelation between diabetes, thyroid hormones & dyslipidemia.

Conclusion: Thyroid dysfunction is associated with lipid dysregulation in T2DM patients. Early & routine screening of thyroid disorders in T2DM patients can reduce morbidity due to dyslipidemia.

Diabetes mellitus and thyroid dysfunction are the most common endocrinological disorders in the current era. Type 2 Diabetes mellitus is one of the most important global health issue as it affects more than 463 million people and it is expected to reach around 700 million by 2045.1 Type 2 Diabetes mellitus consists of an array of dysfunctions characterized by hyperglycemia, resulting from the combination of resistance to insulin action and/or inadequate insulin secretion. It is usually associated with dyslipidemia, which increases risk of cardiovascular events leading to morbidity & mortality. Thyroid dysfunction has been frequently encountered in diabetes patients with hypothyroidism being the most common type of dysfunction.2 Hypothyroidism, an important cause of secondary dyslipidemia, is often accompanied with increased levels of total cholesterol & low density lipoprotein-cholesterol (LDL-C).3 By studying the association of thyroid hormones & lipid profile in diabetes patients, we can enhance the knowledge about the interrelation between diabetes, thyroid hormones and lipid profile.

Statistical analysis was done by IBM SPSS Statistics for Windows, Version 20.0. Mean and SD were used to summarize the continuous variables. Independent samples t test was used to test the significance in difference between the parameters for cases and controls. Pearson's correlation coefficient was used to check the linear relation between parameters of lipid profile and thyroid profile. A P value of <0.05 was considered as statistically significant.

Age distribution of cases and controls

Gender distribution of cases and controls

Comparison of FBS and PPBS in cases and controls 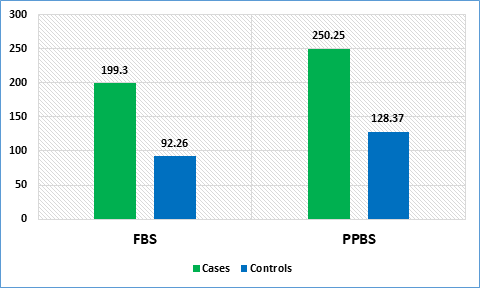 The mean fasting blood glucose and post prandial blood glucose level among cases and controls which was found to be statistically significant.

Figure 1 shows the mean fasting blood glucose and post prandial blood glucose level among cases and controls which was found to be statistically significant.

Biochemical parameters of cases and controls

Correlation between TSH and lipid profile 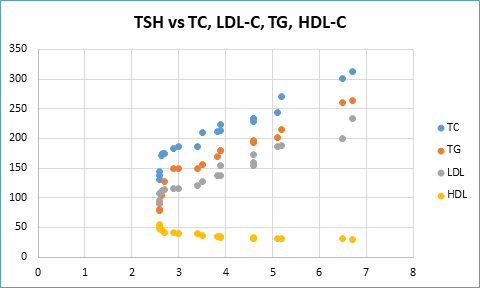 Correlation between T3 and lipid profile 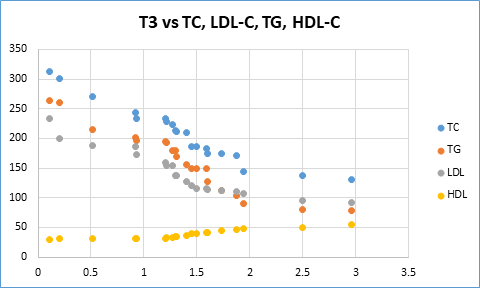 Correlation between T4 and lipid profile 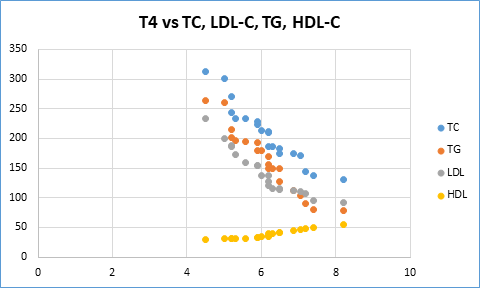 In this present study, higher serum level of Total cholesterol, triglycerides & LDL –C seen in T2DM patients. Dyslipidemia in diabetes is due to low activity of lipoprotein lipase or limited lipoprotein clearance.4

Result of the present study showed that the levels of serum T3, T4 were significantly lower in diabetes while serum TSH was significantly higher in diabetes when compared to that of controls. These findings were consistent with that found by Sarala Devi Tenepalli et al.,3 Jiffri EH et al.,4 Demitrost et al.,5 In diabetic patients, the nocturnal TSH peak is blunted and the TSH response to TRH is impaired,6 resulting in reduced iodide uptake by the thyroid gland that limits T3 and T4 production.7

Thyroid dysfunction is associated with lipid dysregulation in T2DM patients. By maintaining good glycemic control in T2DM, we can prevent the development of thyroid dysfunction and its complications. Also, screening for thyroid disorders and early intervention in T2DM patients can reduce morbidity due to dyslipidemia. Hence thyroid function tests may be included as part of routine investigations in patients with Type 2 DM.

V Asvold The association between TSH within the reference range and serum lipid concentrations in a population-based study. The HUNT studyEur J Endocrinol200715621816